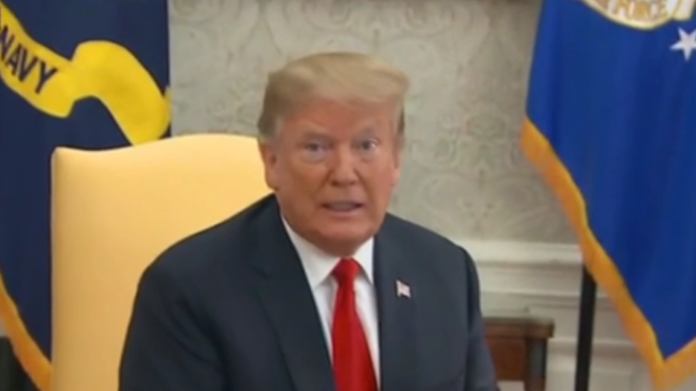 During an Oval Office appearance with Israeli Prime Minister Benjamin Netanyahu, President Donald Trump threatened the “evil people” he said he blamed for instigating the Russia investigation that led to the appointment of Special Counsel Robert Mueller, remarking:

“There are a lot people out there that have done some very, very evil things, very bad things, I would say treasonous things, against our country. Hopefully the people that have done such harm to our country — we’ve gone through a period of really bad things happening — those people will certainly be looked at.”

“I have been looking at them for a long time and I’m saying, ‘why haven’t they been looked at?’ They lied to Congress. Many of them, you know who they are. They’ve done so many evil things.”

Seconds later, the president complimented himself for his devotion to the country:

“I love this country as much as I can love anything, my family, my country, my God. What they did, it was a false narrative, it was a terrible thing.”

When Trump was asked if Robert Mueller had acted honorably, the president responded:

Another reporter asked if Trump supported releasing the full Mueller report to the public, Trump said he would leave that decision to Attorney General William Barr, adding:

“Wouldn’t bother me at all.”

Of course, if Trump truly feels that way, he can always pick up the phone and tell his attorney general that he wants the entire report released a soon as possible, along with the supporting documents that were compiled by the special counsel. After all, supposedly innocent people have nothing to hide.

Even if Barr doesn’t release the Mueller report, Congress still has the right to call Mueller to Capitol Hill and ask him in great detail exactly what he discovered over the course of his investigation. And many Democrats are already saying they plan to do exactly that. Barr will also be called to testify in the weeks ahead.

Trump’s remarks about looking at “evil people” is right out of the authoritarian playbook, and suggests he won’t be happy until he’s crowned emperor for life like some sort of American Caesar.