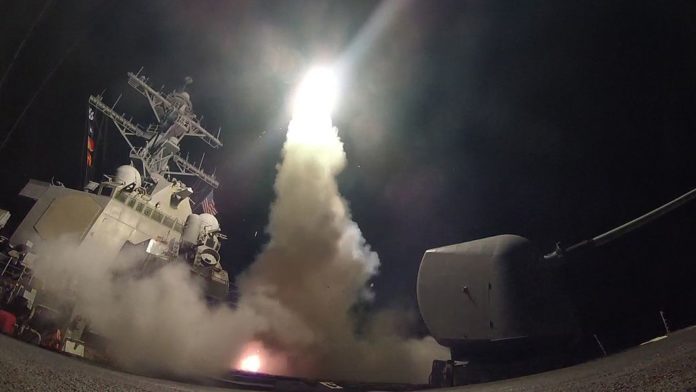 Tensions between Russia and the United States have been running high for months, but it appears that Syria could be the issue that ushers in World War III, at least if Trump has his way.

Early Wednesday morning, Russian ambassador to Lebanon Alexander Zasypkin warned that his country would retaliate if the United States conducts missile strikes against Syria in response to the alleged chemical attack that killed dozens of Syrians in Douma last week. Zasypkin said:

“If there is a strike by the Americans, then … the missiles will be downed and even the sources from which the missiles were fired.”

Trump responded to the warning with an open threat on Twitter.

Russia vows to shoot down any and all missiles fired at Syria. Get ready Russia, because they will be coming, nice and new and “smart!” You shouldn’t be partners with a Gas Killing Animal who kills his people and enjoys it!

Perhaps more frightening, Trump went on to tweet that U.S.-Russia relations are worse than ever before, including during the Cold War when nuclear war loomed over the world.

Our relationship with Russia is worse now than it has ever been, and that includes the Cold War. There is no reason for this. Russia needs us to help with their economy, something that would be very easy to do, and we need all nations to work together. Stop the arms race?

But as you may recall, Trump himself initiated an arms race by ordering the production of more nuclear missiles last year.

Trump then had the gall to blame the Russia investigation for the “bad blood” with Russia.

Much of the bad blood with Russia is caused by the Fake & Corrupt Russia Investigation, headed up by the all Democrat loyalists, or people that worked for Obama. Mueller is most conflicted of all (except Rosenstein who signed FISA & Comey letter). No Collusion, so they go crazy!

Russian foreign ministry spokesperson Maria Zakharova fired back on Facebook by pointing out that any missile strike could destroy evidence of the chemical attack that inspectors are looking for, including evidence that there was no chemical attack.

Make no mistake. Trump is wading our nation into a conflict that would involve several nations, including Iran, Turkey, Israel, and even China. And we’re not talking about a third-world country’s military here. The Russians would be bringing their latest hardware and well-trained troops to the battlefield. And that’s on top of the nuclear arsenals of both nations.

Our nation has been at war for far too long. We can’t afford the massive costs tied to war with Russia, especially since our national debt has spiraled out of control. And the fact is that Russia can bring more troops to fight than we can unless Trump hypocritically reinstates the same military draft that he repeatedly dodged during the Vietnam War.

By making this missile threat, Trump is demonstrating that he is far too unstable and unpredictable to be president. He should not be in command of our armed forces. And Congress must act now to make sure he doesn’t drag us into a destructive war that neither side can really win.