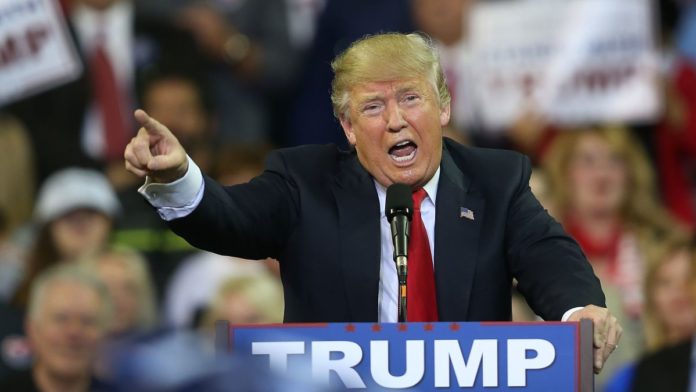 Over the course of his presidency, Donald Trump has repeatedly attacked the press, even going to far as to refer to the media and reporters being the “enemy of the people.”

And now the president is threatening to ban two Washington Post reporters from the White House for daring to write an article critical of him, Mediaite reports:

Few single reports have drawn such intense acrimony as the Washington Post’s recent story on Trump’s “lost summer,” which reported on a season “defined by self-inflicted controversies and squandered opportunities.”

The piece prompted a rare rebuke in the form of an op-ed, written by White House communications staffers Stephanie Grisham and Hogan Gidley, for the Washington Examiner on Friday.

The Washington Post’s @PhilipRucker (Mr. Off the Record) & @AshleyRParker, two nasty lightweight reporters, shouldn’t even be allowed on the grounds of the White House because their reporting is so DISGUSTING & FAKE. Also, add the appointment of MANY Federal Judges this Summer! https://t.co/7d33tzKxXq

CNN’s Brian Stelter noted that Trump’s latest threat comes as the administration has lost court cases involving attempted bans on reporters. One of those decisions was handed down just this week:

Trump’s new tweet saying two WaPo reporters “shouldn’t even be allowed on the grounds of the White House” is notable because his admin has tried booting individual reporters twice now, and lost in court both times, as recently as this week.

The reference to this week involves the case of Playboy reporter Brian Karem, whose press pass was revoked after he had a verbal altercation with former administration aide Sebastian Gorka. A few months ago, CNN reporter Jim Acosta also had his credentials suspended.

Trump got reminders from others on social media that the First Amendment protects reporters and the media. And there were also sly jabs at his recent use of a Sharpie to pretend a weather map showed Hurricane Dorian would hit Alabama:

Why don’t you just correct their stories with a Sharpie? Hasn’t stopped you before.

Donald Trump tried to ban 2 reporters from the White House

Donald Trump was overruled by a federal judge 2 times

Does he really want to lose in court again?

Donald, I’m a proud subscriber to the @washingtonpost and the Founding Fathers ensured freedom of the press was protected in the Constitution to deal with nasty situations like your failing, rights abusing “leadership.” Those 2 reporters have every right to enter the @WhiteHouse

You will NEVER succeed in banning reporters. Not @Acosta @BrianKarem Rucker, Parker or anyone else who’s simply doing their jobs to courageously report the news in the face of your media-hostile administration. The courts are on the side of freedom of the press & democracy…

Have you noticed how ZERO Republicans in Congress are on cable news anymore defending Trump?! Even They get that #PresidentSharpie is going to drag them down the way the Titanic sucked down people when it finally went under.