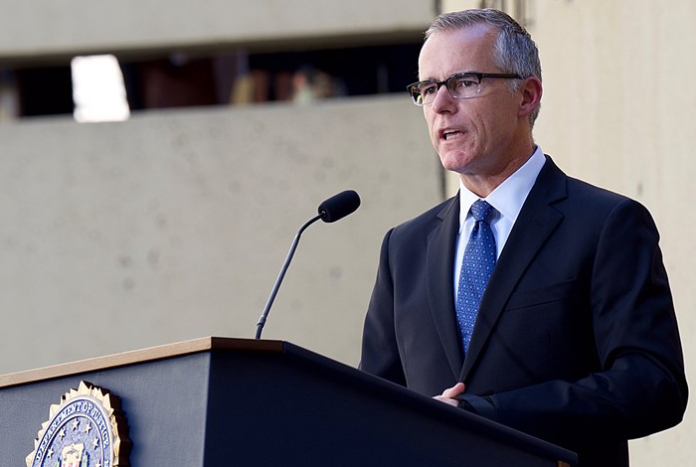 President Donald Trump threw a hissy fit aimed at former FBI Assistant Director Andrew McCabe on Thursday morning in response to the revelation that he prevented Trump from killing the Russia investigation.

In his new book, McCabe says that he ordered an obstruction of justice investigation against Trump after he fired FBI Director James Comey in an effort to prevent Trump’s replacement pick from sweeping the Russia probe under the rug.

“I wanted to make sure that our case was on solid ground and if somebody came in behind me and closed it and tried to walk away from it, they would not be able to do that without creating a record of why they made that decision,” McCabe told CBS on Thursday morning. “I was very concerned that I was able to put the Russia case on absolutely solid ground in an indelible fashion that, were I removed quickly or reassigned or fired, that the case could not be closed or vanish in the night without a trace.”

In response to the revelations, Trump angrily lashed out at McCabe and accused him of being a Hillary Clinton crony all while dredging up the same misleading attacks on McCabe and his wife that he has previously peddled.

Disgraced FBI Acting Director Andrew McCabe pretends to be a “poor little Angel” when in fact he was a big part of the Crooked Hillary Scandal & the Russia Hoax – a puppet for Leakin’ James Comey. I.G. report on McCabe was devastating. Part of “insurance policy” in case I won….

….Many of the top FBI brass were fired, forced to leave, or left. McCabe’s wife received BIG DOLLARS from Clinton people for her campaign – he gave Hillary a pass. McCabe is a disgrace to the FBI and a disgrace to our Country. MAKE AMERICA GREAT AGAIN!

Trump’s unhinged rant suggests that what he aimed to do by firing Comey is bury the Russia investigation as McCabe feared, which gave the FBI cause to investigate obstruction. After firing Comey, Trump bragged about it during an interview with NBC’s Lester Holt in which Trump claimed he was thinking about the Russia probe when he fired Comey and actually boasted to Russian officials inside the Oval Office that firing Comey takes the Russia pressure off.

It sounds like Trump is mad because McCabe prevented his scheme like any great FBI agent would do in the service of their country.