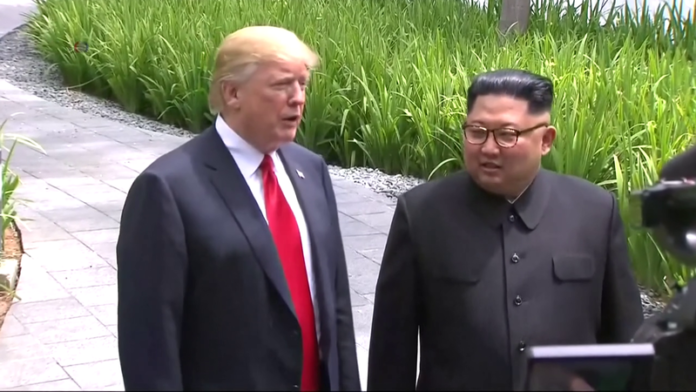 Could President Donald Trump secretly sell out America in a private secret meeting with North Korean dictator Kim Jong Un the way he has in secret meetings with Russian dictator Vladimir Putin?

As Trump prepares to travel to Vietnam despite his bone spurs to hold another summit with Kim Jong Un, administration officials have confirmed that Trump will meet with him one-on-one with just translators in the room, and it’s likely we’ll all be kept in the dark about what was said between them.

“It’s going to be similar in format to what you saw last June 12 in Singapore,” a White House official told The Hill on Thursday. “There will be an opportunity for the two leaders to see one another one-on-one, to share a meal and engage in expanded meetings of their respective delegations.”

During that first summit, Trump met with Kim with only their translators present. Only this time, Trump is desperately trying to convince everyone that he has achieved North Korean denuclearization and deserves a Nobel Peace Prize for it, which is false because North Korea has been duping Trump all along by actively constructing missile facilities and only stopped testing nuclear devices because they have a sufficient stockpile in their possession.

Even Trump’s own intelligence chiefs agree that North Korea is still a threat and won’t denuclearize.

Understandably, it is feared that Trump could make agreements with Kim that compromise American national security and that of our Asian allies, especially since North Korea has been demanding the withdrawal of all U.S. forces from Southeast Asia and the dropping of economic sanctions.

What’s worse is that we may not learn of this treachery until it’s too late because Trump has a history of going to great lengths to keep what is said in his private meetings with foreign dictators a secret that is even kept out of classified files.

In January, reports revealed that Trump employed desperate measures to keep his private one-on-one meetings with Putin a secret. Anything could have been said between the two, including orders from Putin to Trump on everything from NATO to Syria to sanctions against Russia to withdrawal from the Intermediate-range Nuclear Forces Treaty.

Trump could easily lie about what was said during the meeting to make it look like North Korea is denuclearizing when they clearly are not.

Clearly, Trump is desperate for a win, even if it’s a fake victory, which means he might make a deal with Kim to play ball and just pretend things are going great even though the situation has only gotten worse and the risk to our own national security grows. Trump could also pass sensitive American intelligence to Kim Jong Un and we wouldn’t know it.

A one-on-one meeting without several witnesses is just a bad idea and is not in the best interests of the United States.