The United States Blues
Home News Trump told his ambassador to Ukraine that the country belonged to Russia:... 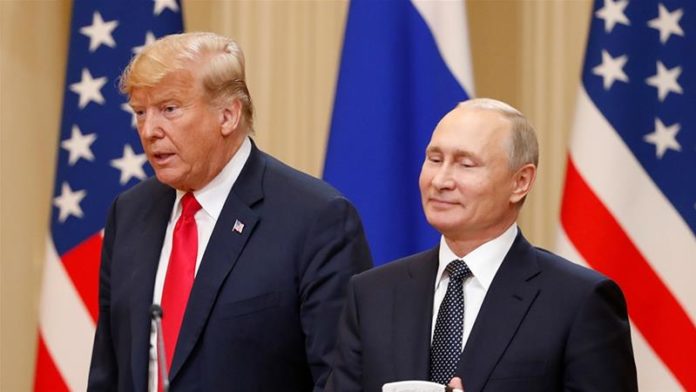 When President Donald Trump met with his top advisers in May to discuss the issue of Ukraine and its new president, Volodymyr Zelensky, he repeatedly spouted off conspiracy theories that sounded a lot like the same things the Russian government has often said about the country, according to the Washington Post:

(The advisers) had barely begun their pitch when Trump unloaded on them, according to current and former U.S. officials familiar with the meeting. In Trump’s mind, the officials said, Ukraine’s entire leadership had colluded with the Democrats to undermine his 2016 presidential campaign.

“They tried to take me down,” Trump said.

Secretary of Energy Rick Perry then tried to explain to Trump that the new president of Ukraine was a reformer committed to weeding out corruption in the country, but the president refused to accept what he was told:

“They are horrible, corrupt people.”

And that overarching theme also runs throughout the depositions being taken by the House Intelligence Committee since the impeachment inquiry began in October:

“We could never quite understand it,” a former senior White House official said about the opposition to Ukraine. The former official also said that the opposition stemmed from the embrace of the conspiracy theories peddled by Manafort and his attorney Rudy Giuliani. “There were accusations that they had somehow worked with the Clinton campaign. There were accusations they’d hurt him. He just hated Ukraine.”

Trump’s animosity toward Ukraine was so extreme that some aides were fearful the president would completely abandon the longtime U.S. ally.

On another occasion in 2017, the Post notes, Trump met with ambassador to Ukraine Kurt Volker for a briefing and revealed that he thought Ukraine wasn’t a “real country” and actually belonged to Russia:

“Trump then peppered Volker with his negative views of Ukraine, suggesting that it wasn’t a ‘real country,’ that it had always been a part of Russia, and that it was ‘totally corrupt.'”

Whatever his rationale and motivations, the fact that Trump appears to have insisted that the Ukrainians provide him with dirt on former Vice President Joe Biden and his son, Hunter, has led to the impeachment inquiry. And even though the president may try to insist that wasn’t his intent, that won’t be nearly enough for him to extricate himself from the hole he’s dug for himself.