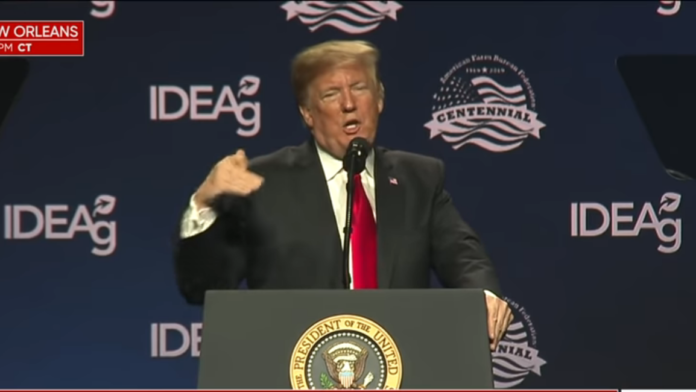 Donald Trump absolutely loves to brag about all the things he’s done as president. He also loves to claim that he’s the greatest American leader since FDR.

But something Trump said Monday while speaking at the Farm Bureau Convention in New Orleans may well prove to be the biggest exaggeration Trump has made in months.

During his speech, Trump said he had personally been responsible for making sure the Veterans Choice Act was passed by Congress. But that bill was passed in 2014, when Barack Obama was still in the White House:

Trump is telling his regular rambling lies. He boasts about how he was the one who finally got the Veterans Choice program passed. It was passed under Obama. Trump signed a law that changes the program.

It probably won’t surprise you to know that this isn’t the first time Trump has tried to take all the glory for the Veterans Choice Act. Back in the fall of 2018, PoltiFact busted the president for this very same lie, writing:

“The idea for the Veterans Choice Program, which was created by the bipartisan Veterans Access, Choice, and Accountability Act, signed by President Barack Obama on Aug. 7, 2014. The legislation, which garnered a 91-3 vote in the Senate and a 420-5 vote in the House, followed a scandal over wait times at Veterans Affairs facilities.”

About the only legislative achievement Trump owns is the Tax Scam plan which slashed tax rates for the richest Americans and large corporations. Problem is, the economy was already humming along before the tax cut, and since it went into effect, the stock market has seen its worst returns in over a decade. Some economists are even predicting a recession either this year or next thanks to the tax cuts and Trump’s ongoing trade war.

As we’ve repeatedly seen over the course of Donald Trump’s time in office, anytime he says something, it’s always best to assume he’s lying until proven otherwise.