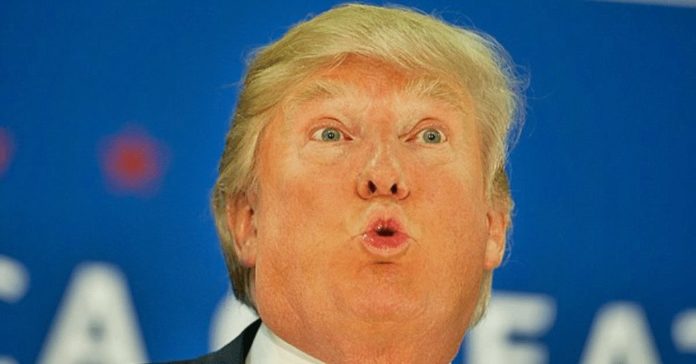 As if he hadn’t already done enough damage to the U.S. relationship with our European allies with his performance in France over the weekend, President Donald Trump woke up early on Tuesday morning and tweeted out a strange conspiracy theory about Germany attacking France.

Apparently still upset that French President Emmanuel Macron has suggested the creation of a European army if the U.S. continues to withdraw from NATO, Trump posted this:

Emmanuel Macron suggests building its own army to protect Europe against the U.S., China and Russia. But it was Germany in World Wars One & Two – How did that work out for France? They were starting to learn German in Paris before the U.S. came along. Pay for NATO or not!

That’s just great, Donnie. You managed to insult two of our main allies in NATO by saying that they’ll go to war unless they fork over more money for U.S. protection. Sounds an awful lot like extortion.

Online responses to Trump’s gibberish were immediate and righteously harsh:

Little history… The American Army was being beaten badly during the Revolutionary War.

We were out of money and supplies.

If France had not come to our aid we would all still be singing God Save The Queen.

You’re seriously threatening another World War to protect your fragile ego? I can’t wait for you to ROT in a Federal Penitentiary. #25thAmendmentNow #ImpeachTrump #TraitorTrump

THEY show respect to THEIR troops and veterans. The BRAVE men and women who sacrifice ALL and NEVER ran away from the rain. Respecting their OWN military/veterans who answered the “patriotic” call to serve, protect and defend DEMOCRACY. *Unlike some*

You exhibit the ability to think and reason of a 5y/o child. You also seem to not know ANY U.S. history. Are you sure you even went to school?

Did Vladimir Putin suggest that Trump send out this tweet when he met with Donnie in Paris, or is the President of the United States actually this clueless?