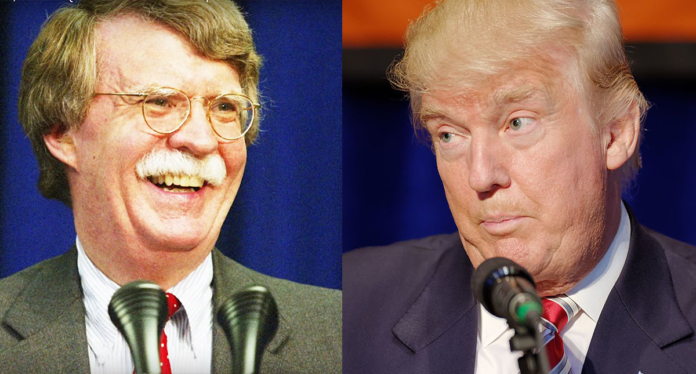 Gabriel Sherman delivered another exposé for Vanity Fair that reveals the constitutional crisis we all feared was coming is now materializing in full horrific view right before our very eyes.

“Trump Unleashed,” the version of President Donald Trump that emerged after his last round of firings, is indeed spiraling out of control in this article and ready to fire Mueller or anybody else he likes, and he doesn’t really seem to have a plan so much as an overruling id psyche at the wheel.

One writer called it, “unpremeditated authoritarianism,” and that really fits.

Americans wouldn’t be out of line to think Trump might do something destructive or irrational. We should continue telling our representatives as much – daily.

Why do we get that idea? Consider this paragraph from Sherman:

“‘He’s sitting there bitching and moaning. He’s brooding and doesn’t have a plan,’ a Republican close to the White House said last night. ‘I could see him having a total meltdown and saying, “Fuck it, I’m firing all of them,” a Trump friend told me. This is very dry tinder. If someone strikes a match to it, you could see it catching fire.'”

Trump Unleashed emerged after losing what few loyal aides he had left. Hope Hicks and security chief Keith Schiller are gone. His lawyer quit, and his Chief of Staff, John Kelly can no longer restrain his worst impulses. Javanka is back peeking in the door again as the adults left the room, ready to get back up to mischief.

It’s like having the worst version of Trump facing the most insane pressures imaginable, as the FBI just raided his personal lawyer, Michael Cohen’s home, and office. The old Access Hollywood tape is now part of the focus, and who knows what investigators will uncover in the treasure trove of records they found?

We all hope they get a good look at those mysterious long-withheld tax returns.

Trump’s attitude is apparently brushing off on his equally unstable National Security Advisor, John Bolton. He is reportedly on an inquisition of his own to eliminate any potential leakers, just at a time when America really wants to know what warmongering inclinations Bolton might display.

The last thing we need is an unleashed and dangerous President and National Security Advisor in a snit, and hiding behind closed doors.

The deputy national security adviser, Nadia Schadlow has just resigned as part of the ever-revolving door in Trump’s administration. Michael Anton, the N.S.C. spokesman, announced plans to leave as well. Although John Kelly apparently fought to keep him in place, Bolton pressured him out, accusing him of being a leaker.

Who knows if he’ll get his way purging other national security experts, in what Obama’s security adviser says is probably for partisan reasons?

Then, we get the impression that Trump doesn’t really like Bolton to begin with. Even he knows he’s got a hair-trigger for sending in America’s troops to war. Trump likely just wanted to distract from the Stormy Daniels scandal.

That’s one heck of a way to determine our country’s future security, isn’t it?

“Bolton’s hawkishness could be too much even for Trump. ‘Trump’s still suggesting to people that Bolton is a war-party person. He didn’t really want to pick Bolton, but he wanted to change headlines that weekend,’ a friend said, referring to the Stormy Daniels 60 Minutes interview. ‘I think Trump gives him a short leash.'”

If these reports are accurate, then we have every reason to think that the White House is in a state of pure chaos and America’s security is compromised. Thanks very much to the impulses of a great many American voters to throw a grenade into Washington called Donald Trump…

The coming days will reveal if our democracy can survive such a self-inflicted explosion. Let’s hope the cooler heads and the adults remaining wake up and take action before it’s too late. Our own better angels tell us they will, and we’ll try not to think too hard what Trump and Bolton are doing right now.

See more about John Bolton below:

Featured image: Screenshot via YouTube and Trump via Michael Vadon Via Wikimedia Commons/CC-BY-SA-4.0.