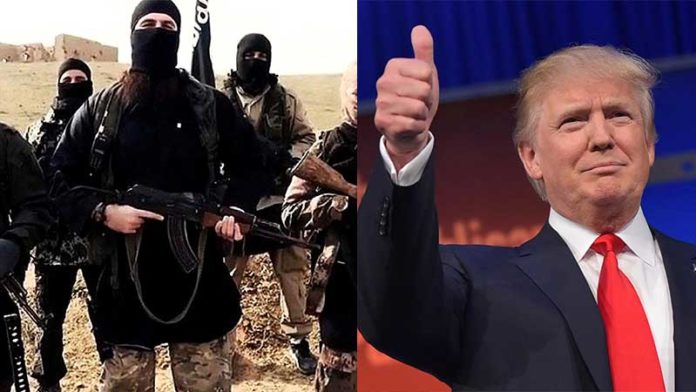 On Wednesday, reportedly against the advice of his top military advisers, President Donald Trump announced via Twitter that he would immediately pull all American troops out of Syria, claiming that the move was justified because the terror group ISIS had been defeated:

And yet less than 24 hours later, Trump says ISIS hasn’t been destroyed, but he’s going to let Russia and Iran take care of them:

Getting out of Syria was no surprise. I’ve been campaigning on it for years, and six months ago, when I very publicly wanted to do it, I agreed to stay longer. Russia, Iran, Syria & others are the local enemy of ISIS. We were doing there work. Time to come home & rebuild. #MAGA

Does the USA want to be the Policeman of the Middle East, getting NOTHING but spending precious lives and trillions of dollars protecting others who, in almost all cases, do not appreciate what we are doing? Do we want to be there forever? Time for others to finally fight…..

….Russia, Iran, Syria & many others are not happy about the U.S. leaving, despite what the Fake News says, because now they will have to fight ISIS and others, who they hate, without us. I am building by far the most powerful military in the world. ISIS hits us they are doomed!

Despite his claims that ISIS would be “doomed” if they hit the United States, a member of his own party said Thursday morning that the president has all but assured the U.S. will now be attacked by the terror group. Rep. Will Hurd (R-TX) told CNN host Alisyn Camerota:

“Why does this matter for us? There’s a little thing called ISIS. There’s still roughly 300,000 ISIS fighters across Iraq and Syria. There’s no doubt they are on the run, my friends in the military and intelligence community have laid the hammer down — these ISIS fighters are on the run, but they have the ability to regroup. When they do that, what is their target going to be? It’s going to be the United States of America.

“We should be making sure that we are making it so the American people don’t have to deal with ISIS in the future and that’s why we should stay.”

Makes you wonder if perhaps the idea was Putin’s instead of Trump’s.