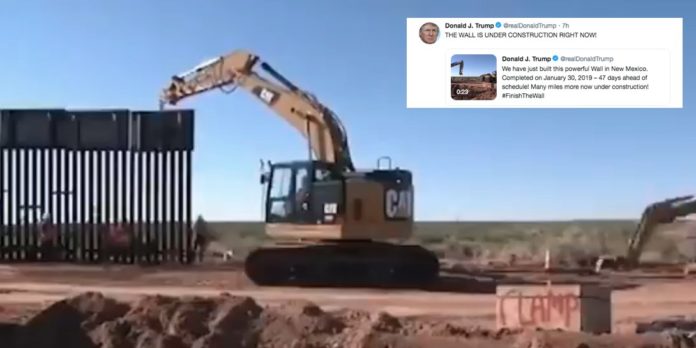 Earlier this week, Trump posted video on Twitter which he claimed was evidence of construction of the wall on the U.S.-Mexico border:

We have just built this powerful Wall in New Mexico. Completed on January 30, 2019 – 47 days ahead of schedule! Many miles more now under construction! #FinishTheWall pic.twitter.com/TYkj3KRdOC

THE WALL IS UNDER CONSTRUCTION RIGHT NOW! https://t.co/exUJCiITsz

Problem is, those tweets are gigantic lies, HuffPost reports:

“The U.S. Army Corps of Engineers, whose logo appears in the bottom corner of the video Trump shared, actually produced the clip in September 2018, a spokesperson told veterans news website Task & Purpose. It shows ‘a replacement project’ for a section of a barrier that was in place before Trump assumed office.”

Brian Williams even did a fact-check of Trump’s specious claim on his show Thursday evening, determining that as with most things, the president is just making things up as he goes along:

President Trump tweeted a time-lapse video of work along the border wall in New Mexico: “Many miles more now under construction.”

Even a local TV station in Albuquerque got into the act, calling Trump out for his BS, along with the Corps of Engineers:

That video Trump is tweeting to show the wall under construction? Not true, says *the Army Corps of Engineers PAO chief who provided the old footage.* “It’s a replacement project… I’ve been in this division for 12 years and we were doing border wall replacement work back then.” https://t.co/DOWvYNklrR

Total lie, number 8649th.. That is replacement wall footage taken not to long ago.. You’re so brazenly loose with the truth, Donald, it’s kind of awe inspiring.

That’s why you need the “FAKENEWS” propaganda slogan & line for the MSM, because they consistently call you out on it

we went through this yesterday. this is a REPAIR to an existing barrier. a project that was planned for and budgeted by Obama. stop taking credit for someone else’s work. and now the Deplorables are going to scream at me all day just as they did yesterday, but facts are facts

YOU
ARE
A
PATHOLOGICAL
LIAR…
1st off the 20 mile replacement in Santa Teresa newsflash this project started in 2008.
The 2017 & 2018 appropriations expressly FORBIDS your administration using funds to built your bullshit wall
March 2018 CPB report https://t.co/bYjKQYaR3V

Dude…….this is repair to work begun in 2017. THAT work was approved before you became President. You really do just make shit up.

Then I guess you don’t need a #NationalEmergency now.

#FakeNews this is a replacement
Section of wall that was funded through the Obama administration in 2009. It IS NOT NEW walking. As always trying to take credit for others work and claiming it’s something that it isn’t. What a child