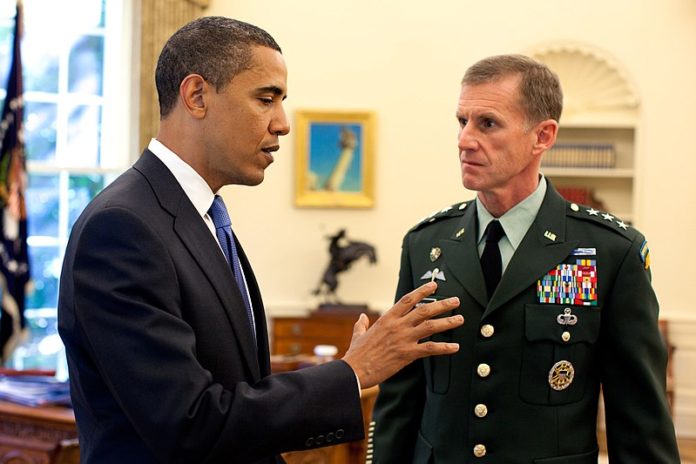 President Donald Trump lashed out at retired General Stanley McChrystal on Tuesday morning over remarks made about him during an interview.

“I don’t think he tells the truth,” McChrystal told ABC’s Martha Raddatz on Sunday, going on to agree that Trump is “immoral” before criticizing his decision to fire Mattis for resigning in protest of his surrender in Syria before ISIS is defeated.

“What I would ask every American to do is again, stand in front of that mirror and say, what are we about?” the retired general continued. “Am I really willing to throw away or ignore some of the things that people do that are pretty unacceptable normally just because they accomplish certain other things that we might like. If we want to be governed by someone we wouldn’t do a business deal with because their background is so shady, if we’re willing to do that then that’s in conflict with who I think we are. And so I think it’s necessary in those times to take a stand.”

Well, Trump finally responded to McChrystal’s remarks by calling him a “dog” and accusing him of being a “Hillary lover.”

It should be pointed out that McChrystal was not fired for his performance as Commander of the International Security Assistance Force and U.S. Forces in Afghanistan. He was fired by former President Obama for publicly making inappropriate remarks about Vice-President Joe Biden and other administration officials.

Trump is literally insulting a widely respected military leader who served in the 82nd Airborne and the Army Rangers, and has served as an officer during the Gulf War and as a commander during the Iraq War and War in Afghanistan.

His service is impeccable, unlike Trump, who never served but instead dodged the draft five times during the Vietnam War.

Your constant and vulgar disrespect for our Military leaders is disgusting.
Calling an Army General a “dog” shows how utterly UNFIT you are.
When the history books are written your “presidency” will be tossed in to the ashheap of shame. And you will be thought of as UNAMERICAN pic.twitter.com/5n2vsXfj6E

If this childish tweet had been written by an intern in any past administration, the intern would have been fired.

These tweets tell us a lot about you and nothing about your intended target:
You know nothing about dogs.
President Obama was just voted Most Admired – again.
Laura Ingham is losing sponsors.
General McChrystal earned his title, Mr. “President”.
You have no decency or shame.

I guess it’s not a surprise that the coward who faked a foot boo boo to get out of serving in Vietnam hates the courageous heroes who served and climbed to the highest ranks.

Wow, and the complete disrespect for our nations defenders from a dog that had his family pay off a doctor to falsify medical diagnosis in order to be a draft dodger!

Go follow @StanMcChrystal and tell everyone else to, as well. That’s the best way to combat asinine tweets like this.

We’re only 11 hours into 2019 and Trump has already insulted our military. #HappyNewYear

PRESIDENT Obama RESPECTFULLY accepted GENERAL McChrystal’s resignation and then PROMPTLY nominated GENERAL Petraeus as his replacement. No lapse in leadership for our service members and never any absence in dignity TO a gifted leader FROM a gifted leader! #fixeditforyou