The United States Blues
Home National News Trump voters in Texas furious over where he plans to build his... 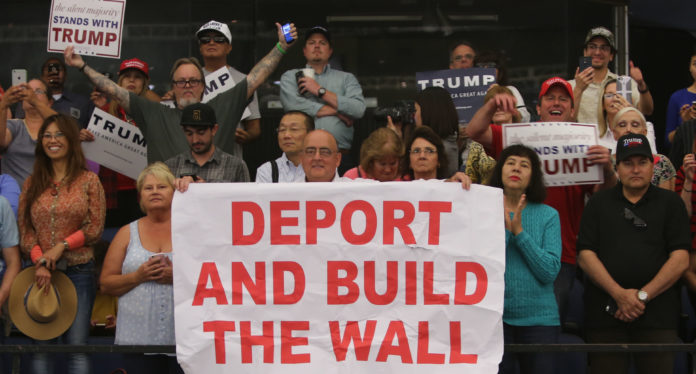 There’s an old expression we’ve all heard, and it certainly seems to apply to voters in Texas who voted for President Donald Trump and loved his idea of building a wall on the U.S.-Mexico border. The expression is, Be careful what you wish for; you just might get it.

Now that Trump has prioritized building his wall as a key part of his reelection strategy, he’s got his top advisers ramping up construction plans and stealing billions from the Defense Department to make it happen.

Meanwhile, in Texas, some of his supporters are finding out that the wall will likely be in their back yards. Literally.

The New York Times reports that Shirley Menard voted for Trump “reluctantly” in 2016, and just found out that the federal government is about to build a 30-foot-tall barrier right on her property:

‘I never thought they’d go through a subdivision,’ said Ms. Menard, a former Houston schoolteacher who said she had been shaken since she was notified in June of plans to build the wall next year. ‘My blood pressure has not been normal since I got that letter.’

Residents in the Texas town of Brownsville have also learned that their lives are about to be totally upended. Trump’s border wall will cut through River Bend Resort and Golf Club, a senior living community:

‘If there’s a good purpose for having that wall cut right through our little community, I guess I would go along with it,” said Susan Kaper,who voted for Mr. Trump and who moved from Michigan to care for her ailing sister. “But I’ve yet to hear any reason why to do that.”

Some residents said they were considering selling their homes, but it was not clear what the market there would be with a wall pending.

Donald Trump clearly seems to believe that he must have major portions of the wall under construction by the time November of 2020 rolls around or he’s in danger of upsetting his political base and not being reelected. But many of the Texans who are now finding out their lives will never be the same if the wall is indeed built are warning that they won’t cast a ballot for Trump in 2020:

Avie Greenslit, a Minnesota transplant who drives around River Bend in her red Hummer-brand golf cart and liked the idea of having a businessman in the White House, is looking elsewhere for 2020. She was scared, she said, by reports last week that Mr. Trump told aides to “take the land” that was needed for the wall.

And yet there were also some who said they don’t want a wall on their property, but won’t abandon the president over the issue:

“To determine whether I vote for this guy or not because of the wall?” Ms. Kaper said. “No, that’s silly.”

But will the majority of 2020 voters be as sanguine about having a wall on their property as Susan Kaper? That remains to be seen.