The United States Blues
Home Healthcare Trump vows his ‘wonderful’ health care package will help him and the... 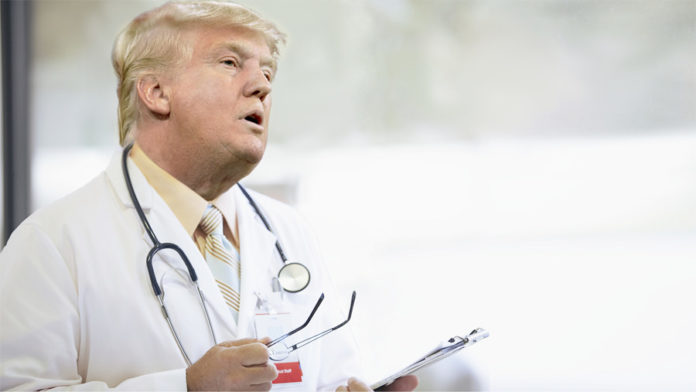 According to President Donald Trump, his planned replacement health care plan for Obamacare is so incredible that when he unveils it, the 2020 election will automatically be won for him and Congressional Republicans.

Of course, Trump failed to reveal a shred of detail about his so-called “wonderful” plan.

Taking to Twitter Wednesday morning, Trump fired off these two tweets on the subject of health care, which has long been a losing issue for the GOP:

While the president may not have asked Senate Majority Leader Mitch McConnell (R-KY) to vote on health care before the next election, he has told the Department of Justice to do everything it can to overturn the Affordable Care Act in federal court. And if he succeeds, tens of millions of Americans will lose their coverage and millions more will no longer have protection for pre-existing conditions.

If Trump thinks the health care issue is such a winner for his party, you have to wonder why most Republicans have told him not to bring the matter up because it contributed to the GOP’s loss of the House in the 2018 midterm.

And social media also weighed in on Trump’s latest claims:

Oh, you have a HealthCare plan, but we can’t see it?

Sounds like your taxes. And your college grades. And the Mueller Report.

Sure, why not postpone good healthcare for all Americans so you can use it for political fodder? #asshole

So in other words, you’re plan is to wait out your entire term and hope you both get re-elected AND win the house? After you already had control of the house and senate for two years and didn’t come up with anything? Good one.

This is another lie. Republicans have NEVER supported covering pre-existing conditions. In fact, they’ve explicitly said it’s not fair to do so. It’s clear that your “healthcare plan” is nothing more than a “reelection plan.” You’ll promise the world and deliver nothing. Again.

Glad you put the focus where it belongs, on YOU and your Campaign. Most Presidents would be worried about pesky little things like Peoples live’s being at stake. Not Trump, you aren’t at all concerned with anything but money and yourself. Way to be real Don!

Trump is literally waiting until after the 2020 election to unveil a healthcare plan where all 130 million Americans with pre-existing conditions are stripped of their health insurance and can die on the streets like animals. It would be a total joke if it wasn’t so sad.