The United States Blues
Home National News Trump Wanted To Withdraw The U.S. From NATO In Summer Of 2018:... 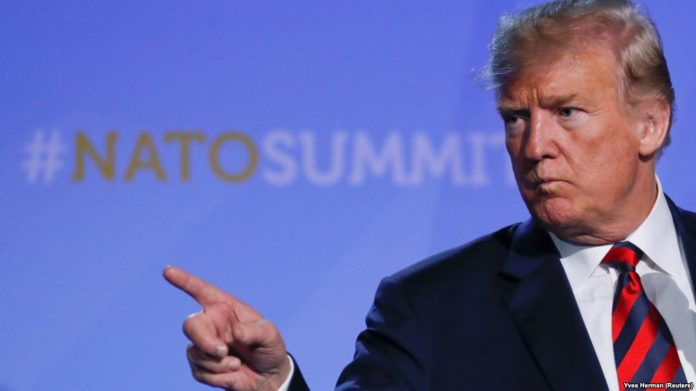 In the summer of 2018, President Donald Trump told national security experts in his administration that he was seriously considering withdrawing the United States from the North Atlantic Treaty Organization (NATO), a move that would have delighted Russian President Vladimir Putin.

“Senior administration officials told The New York Times that several times over the course of 2018, Mr. Trump privately said he wanted to withdraw from the North Atlantic Treaty Organization. Current and former officials who support the alliance said they feared Mr. Trump could return to his threat as allied military spending continued to lag behind the goals the president had set.

“In the days around a tumultuous NATO summit meeting last summer, they said, Mr. Trump told his top national security officials that he did not see the point of the military alliance, which he presented as a drain on the United States.”

The Times report comes on the heels of another revelation late last week that the FBI opened a counterintelligence investigation into the president shortly after he fired FBI chief James Comey. The purpose of that probe was to determine if Trump was working as an agent of a foreign government.

Michèle A. Flournoy, an under secretary of defense under President Barack Obama, said if Trump had pulled the United States out of NATO, which was created in 1949, it would have been “one of the most damaging things that any president could do to U.S. interests,” adding:

“It would destroy 70-plus years of painstaking work across multiple administrations, Republican and Democratic, to create perhaps the most powerful and advantageous alliance in history. And it would be the wildest success that Vladimir Putin could dream of.”

If Trump did try to withdraw from NATO, he would likely face resistance from Congress, the Times notes:

“Any move by Mr. Trump against NATO would most likely invite a response by Congress. American policy toward Russia is the one area where congressional Republicans have consistently bucked Mr. Trump, including with new sanctions on Moscow and by criticizing his warm July 16 news conference with Mr. Putin in Helsinki, Finland.

“Members of NATO may withdraw after a notification period of a year, under Article 13 of the Washington Treaty. Such a delay would give Congress time to try blocking any attempt by Mr. Trump to leave.”

“It’s alarming that the president continues to falsely assert that NATO does not contribute to the overall safety of the United States or the international community. The Senate knows better and stands ready to defend NATO.”