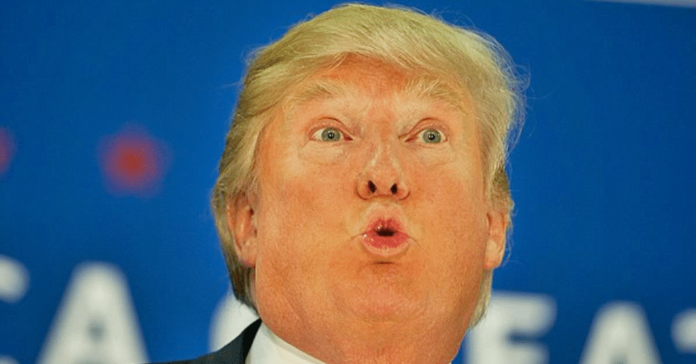 Donald Trump was up early Monday morning, and he decided to weigh in (again!) on the issue of border security and his beloved wall, suggesting that such a structure would actually save “billions of dollars a year” if built:

Anytime you hear a Democrat saying that you can have good Boarder Security without a Wall, write them off as just another politician following the party line. Time for us to save billions of dollars a year and have, at the same time, far greater safety and control!

As if so often the case, there are problems with the president’s so-called logic. First of all, how do you save billions when it will take billions to build such a structure. Secondly, people can go over or under a wall, thereby rendering it worthless and a waste of money.

And while we’re at it, would someone please tell Trump the proper spelling is “Border”?

In a separate tweet, Trump also decided he’d try and make his case for why the Affordable Care Act — i.e. Obamacare — needs to be destroyed, despite the fact that such a move would leave tens of millions of Americans without health insurance:

The DEDUCTIBLE which comes with ObamaCare is so high that it is practically not even useable! Hurts families badly. We have a chance, working with the Democrats, to deliver great HealthCare! A confirming Supreme Court Decision will lead to GREAT HealthCare results for Americans!

Within minutes of his inane tweets, Trump got reaction from other Twitter users:

“Boarder” security? Is this the “smocking” gun which justifies your “seperation” policy? #Trump

Yes please keep us safe from these guys pic.twitter.com/Nv2Mkopv8q

Please, unveil your plan. I’ve been waiting for 2 years.

I have insurance through my employer and my deductible on that guarantees I will never meet it! So tell me why that is so especially since it’s not an Obamacare coverage!

Who knew being president was so difficult, eh, Donnie?