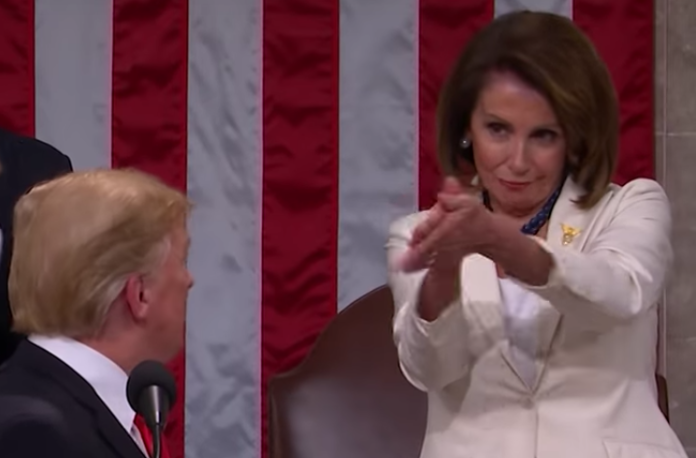 President Donald Trump displayed his jealousy of House Speaker Nancy Pelosi (D-Calif.) on Sunday night by whining about her being featured on “60 Minutes” while he lazed around his Virginia golf course sucking up to Tiger Woods all day.

The CBS news program aired an interview with Pelosi in which she talked about the agenda House Democrats are pursuing, the various committee investigations against Trump and his cronies, her status as the most powerful woman in American political history and her strategy for 2020.

It was nowhere near a “puff piece,” but that’s how Trump characterized it in a Twitter tantrum.

Such a “puff piece” on Nancy Pelosi by @60minutes, yet her leadership has passed no meaningful Legislation. All they do is Investigate, as it turns out, crimes that they instigated & committed. The Mueller No Collusion decision wasn’t even discussed-and she was a disaster at W.H.

The problem is that Attorney General William Barr won’t release the Mueller report, so there isn’t anything to discuss except to speculate on what Trump doesn’t want the American people or Congress to see.

As for meaningful legislation, the House has already passed a Green New Deal resolution, which Republicans killed in the Senate, that would put the United States on a path toward a historical transformation and a clean energy revolution.

And the House passed legislation that would have made Election Day a national holiday and expanded voting rights while making much-needed campaign finance reform a reality.

The reality is that Pelosi and House Democrats are capable of legislating and investigating at the same time and have demonstrated that repeatedly in the last 100 days since taking over the House, a takeover Pelosi helped orchestrate.

Meanwhile, Trump had two years with Republicans in control of Congress and only came up with bad tax law.

As for “puff pieces,” Trump is one to talk since he regularly appears on Fox News in softball interviews with propagandists who stroke his ego every chance they get.

Pelosi also spent much of her time standing up to Trump, like when she forced him to delay his State of the Union Address even though he tried to bully her into letting him deliver it during the government shutdown. Or when she refused to cave in to his demands during the shutdown and he backed down.

Trump is so scared of Pelosi that he can’t even come up with an insulting nickname for her.

And now Pelosi is busy preparing Democrats for a crucial 2020 Election that could see them taking back the White House and the Senate.

So, while Trump is on the golf course or watching television and tweeting, Pelosi is doing her job and leading her party while showing the nation that there is still a grown-up in Washington they can count on.