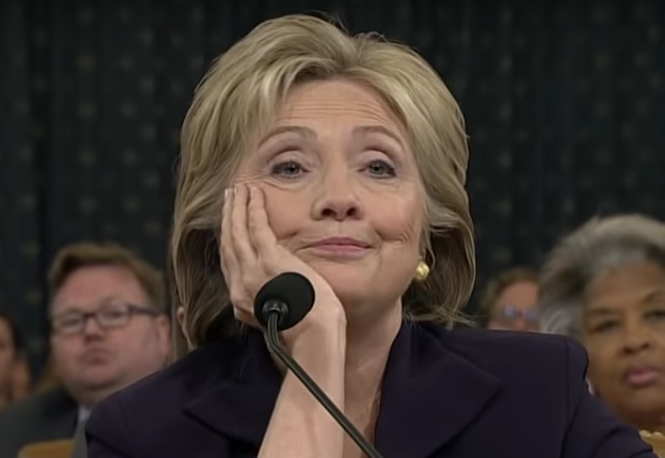 President Donald Trump once again turned to whataboutism in response to one of his associates being indicted and arrested, this time in defense of Roger Stone.

The FBI arrested Stone on Friday morning on seven counts, including lying to Congress, obstruction of justice and witness tampering after Special Counsel Robert Mueller secured an indictment.

Trump initially wailed in response to the news on Twitter by whining that human traffickers are treated better.

But on Saturday morning, he tried an old tactic by accusing former Secretary of State Hillary Clinton of lying to the FBI and accused several others of lying to Congress, including former FBI Director James Comey and former CIA Director John Brennan, who predicted even bigger fish would be indicted when asked to respond to Stone’s arrest on Friday morning:

If Roger Stone was indicted for lying to Congress, what about the lying done by Comey, Brennan, Clapper, Lisa Page & lover, Baker and soooo many others? What about Hillary to FBI and her 33,000 deleted Emails? What about Lisa & Peter’s deleted texts & Wiener’s laptop? Much more!

Seriously, if any of these names had lied to Congress, and a Republican-controlled Congress at that, charges would have been referred to the FBI a long time ago. Trump, as usual, provided zero evidence to back up his claims and is clearly trying to distract and deflect from the news that yet another one of his close associates has been indicted as part of the Russia investigation.

Besides, even if they did lie, it still doesn’t let his own people off the hook for doing it.

Twitter users mocked him for once again whining about Clinton and others to excuse crimes committed by his associates:

You can “whataboutism” all day. You’re screwed.

You do realize that if you own DOJ believed that Comey, Brennan, Clapper, Page or Hillary broke the law, they could indict them, right? The only reason they aren’t being indicted is because they didn’t actually lie or break the law, like so many of your guys did.

Note that he’s not disputing the charges or suggesting the Stone didn’t do anything wrong, he’s just mad that his friend was indicted and his political enemies weren’t

indeed, “what about other people’s imaginary crimes” is such a winning legal strategy, it’s a wonder that Clarence Darrow never thought to use it

good morning, President Caveman, how did you sleep last night

There’s no “If” on this one – Roger Stone was indicted for lying to Congress. Making that a hypothetical by tweet won’t make it go away.

Ha, it’s not a defense to a crime to say “hey someone else did the same thing!” Like for instance, would you let someone who entered the country illegally stay bc they pointed out your wife’s questionable immigration path? I think not…

The bottom line is that if Republicans in Congress believed they were being lied to they would have asked the FBI to investigate a long time ago when they were in power. They didn’t do that because they had no evidence either. Mueller’s investigation is about Russian interference in the 2016 Election, and since Stone lied about his communications with Wikileaks — which the Russians used to make hacked documents public to hurt Hillary Clinton — his lying is relevant to the probe. And that’s why Stone now faces prison time unless he makes a deal, and why Trump is frightened more than ever that Mueller is about to come knocking on his own door. After all, Trump has lied a lot more than Stone.