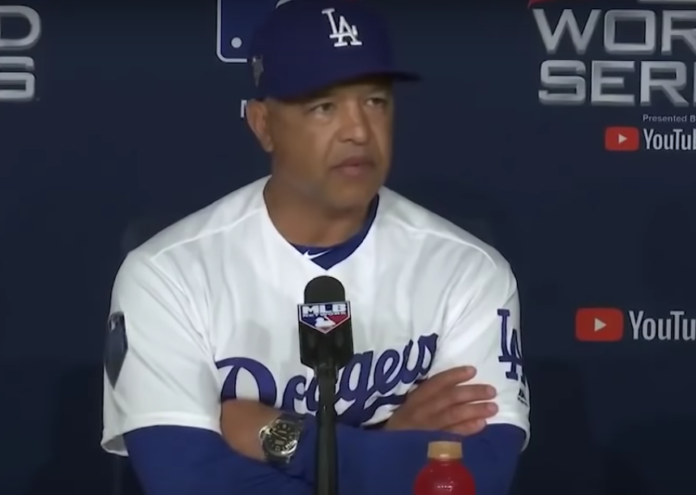 President Donald Trump can’t even talk about the World Series without whining about it, launching an attack on Los Angeles Dodgers manager Dave Roberts for making a pitching decision.

In the seventh inning of Game 4 of the Fall Classic on Saturday night, Roberts made the decision to pull starter Rich Hill after a brief talk on the mound after Hill had walked a man and struck out another with a 4-0 lead.

The Boston Red Sox proceeded to score nine runs against Dodgers relievers en route to a victory that gives them a 3-1 lead in the best-of-seven series.

The decision to pull Hill came under fire after the game, and Trump piled on.

Watching the Dodgers/Red Sox final innings. It is amazing how a manager takes out a pitcher who is loose & dominating through almost 7 innings, Rich Hill of Dodgers, and brings in nervous reliever(s) who get shellacked. 4 run lead gone. Managers do it all the time, big mistake!

Of course, Trump has no real knowledge of whether Dodgers relievers were nervous or not. After all, they pitched really well against a stacked Red Sox lineup in Game 3, holding them to just two runs in the final 11 innings of an 18 inning barn burner.

When informed of Trump’s remarks, Roberts dismissed it:

“That’s one man’s opinion,” he said. “I had a conversation with Rich, and we talked about it. He said, ‘keep an eye on me. I’m going to give it everything I have. Let’s go hitter to hitter and just keep an eye on me.’ So right there, I know Rich did everything he could, competed, left everything out there.”

Indeed, leading up to Roberts going over to the mound, the 38-year-old Hill had already thrown 91 pitches and looked tired. He was also facing the Red Sox lineup for the third time in the game, which is typically when the Red Sox know a good pitcher well enough to begin doing damage.

Roberts took all of this into consideration when he walked to the mound. He talked with Hill, and it was clear that Hill had nothing left after muscling a 91 mph strike to get the first out of the inning. His pitch count likely would have reached 100 before the inning ended, assuming he would not have given up any runs, which would have warranted taking him out of the game anyway.

It should also be pointed out that even Red Sox manager Alex Cora has made some mistakes during this World Series. Just like players, managers also make mistakes, and it’s debatable whether taking out Hill was a mistake or not. It could have just as easily been a mistake to leave Hill in the game.

Either way, the president weighing in like Trump did is distasteful, and demonstrates the hypocrisy of conservatives who have repeatedly criticized athletes for having political opinions. By their logic, Trump should not be criticizing sports teams because he’s not a professional athlete. He should stick to business and politics. But it wouldn’t do much good since he’s not good at either of those either.