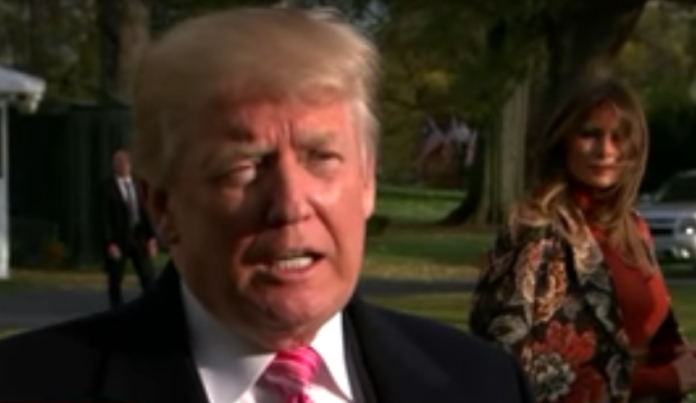 President Donald Trump threw a temper tantrum in support of White House staffers who have resigned after domestic violence allegations were made against them.

Earlier this week, White House aide Rob Porter resigned in disgrace in the wake of domestic violence allegations made against him by his two ex-wives. Both women gave detailed accounts of the abuse to the media and even provided photos of their injuries, one of which was a black eye.

And then a second White House staffer resigned days later.

According to The Washington Post, speechwriter David Sorenson resigned after his ex-wife gave detailed allegations, including running over her foot with a car, putting out a cigarette on her hand and throwing her into a wall. His ex-wife provided text messages, photos, and emails to back up her claims.

Well, Trump isn’t convinced. Instead of supporting the victims, Trump posted a defense of his staffers on Twitter suggesting that they are the real victims and accused the women of making false accusations.

Peoples lives are being shattered and destroyed by a mere allegation. Some are true and some are false. Some are old and some are new. There is no recovery for someone falsely accused – life and career are gone. Is there no such thing any longer as Due Process?

Trump also denied sexual assault allegations made against him by multiple women during the 2016 campaign.

And so, Trump has an established pattern of calling women liars.

Sadly, many, like YOU think #DomesticViolence & #DomesticAbuse are “normal” in relationships. No one knows what goes on behind closed doors-not even you #MoronInChief – Knowing you are #AbuserInChief -your words are hollow-#selfserving as usual- abundance of accusers=more likely

Did you see the PICTURES? And how about justice for the victims? Let’s see how “due process” works out for you! SHAMEFUL!!

Yeah people, Trump and his horde of degenerates are tired of being accused of the things they’ve done. pic.twitter.com/AyUbJqyBtE

Rob Porter’s wife was punched in the face and given a black eye. Is that DUE PROCESS enough? I’m sure you saw the picture. And yet you still defended him.

Trump has claimed for years Obama was born in Kenya.

Don’t lecture us about due process @realDonaldTrump https://t.co/rfkxgklwFu

Have anything to say yet about the WOMEN that Porter abused?…. or better yet, the ones that YOU DID?

And once again no mention of the women, no surprise since you are a serial abuser! Release the Memo, Release your Tax Returns, Talk to Mueller under oath!

If ya can’t take the heat, get out of the kitchen, grandpa.

Funny. I know someone who has been *credibly accused* of sexual misconduct by at least 19 women and who got elected to the most powerful office in the world.

What you are talking about are not “mere allegations” – they are credible accusations. There are multiple victims with no incentive to lie; the witnesses are credible; there is corroborating evidence; and/or there is an admission on an Access Hollywood tape.

As the #MeToo movement continues to gain steam, Trump’s refusal to believe women is only digging a deeper hole that he will have a hard time climbing out of in 2020. Republicans will also have a difficult time as the 2018 election approaches. They are going to be asked if they support the women making these allegations and they will either have to say they do, or go on record taking Trump’s untenable position.

By whining about the allegations, Trump is demonstrating that he doesn’t care about domestic violence victims. If the allegations had been made against a Democrat, Trump would be doing the opposite, just like he did when former Senator Al Franken (D-Minn.) was accused of sexual assault last year.

So, not only is Trump a defender of wife beaters and sexual predators, he’s also a hypocrite.