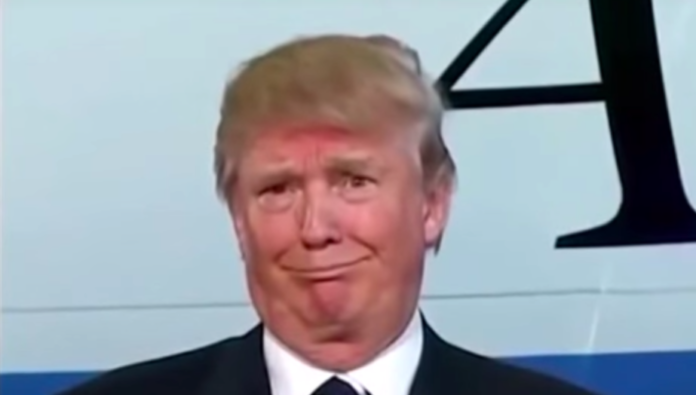 So, we’re in hot water with North Korea, the GOP is trying to pass a tax plan that hurts everyone except the precious one percent, and climate change is completely out of control, but what is President Donald Trump whining about on Twitter?

Trump Has A Sad

He’s upset because the father of one of the three basketballers arrested for shoplifting in China didn’t thank him enough for helping to get his son released, Mediaite reports. LaVar Ball didn’t grovel, so now he thinks he should have left LiAngelo Ball in prison. And said so in a tweet.

Now that the three basketball players are out of China and saved from years in jail, LaVar Ball, the father of LiAngelo, is unaccepting of what I did for his son and that shoplifting is no big deal. I should have left them in jail!

Wannabe @Lakers coach, BIG MOUTH @Lavarbigballer knows if it weren’t for President @realDonaldTrump, his son would be in China for a long, long, long time! #FACT https://t.co/j2GcY7F4f9

Cue Twitter users to tap-dance all over Trump’s stupidity. Indeed, some users couldn’t resist commenting on just that:

LaVar Ball vs. Donald Trump is the epic clash of the intellectual titans America deserves.

While at least one person brought in a historical perspective:

11/19/2017- Trump tweets “ Now that the three basketball players are out of China and saved from years in jail LaVar Ball is unaccepting of what I did for his son and that shoplifting is no big deal. I should have left them in jail!”

New York Times Columnist Maggie Haberman had this to say:

US president says he should have left US citizens imprisoned by non-democratic regime because the family didn’t acknowledge him personally https://t.co/7X11jTvvvR

Literally hundreds of State, DOD, and other federal employees stationed abroad have countless stories of quietly assisting Americans in trouble abroad. Not for glory or credit, but just because they were compatriots and it was right. https://t.co/UTS6470KD8

He still doesn’t seem to understand being president isn’t about people lavishing you with praise & telling you how great you are. https://t.co/FUj601c60W

And James Poniewozik, television critic for The New York Times, who had this to say:

David Frum, a senior editor for The Atlantic and author of the upcoming book Trumpocracy: The Corruption of The American Republic put Trump in his place.

Kevin O’Connor, who writes about the NBA noted:

We are living in a simulation. https://t.co/cl98mpIyDB

Tim Carney, who writes for The Washington Examiner, expressed his frustration with Trump’s idiotic tweets:

Is this his most embarrassing petulant tweet as President? I'm taking nominees for worse ones. But also I'm getting off Twitter.https://t.co/NGUzRImzgt

And Travon Free, who’s done a gig or several on Full Frontal With Samantha Bee and The Daily Show, wondered if this was a ploy to beef up business:

This Lavar Ball/Trump fued feels like a conspiracy Between two crazy businessmen to skyrocket the sells of Big Baller Brand out of pure protest against the president. It's almost "too" genius.

Dan Wolken, a columnist for USA TODAY Sports, seemed to be on the same page as Free.

LaVar Ball trolled the President of the United States into mentioning him by name. I mean, just think about that.

And Tariq Nasheed brings up a crucial point that many have ignored:

Trump is using his criticism of LaVar Ball as a dog whistle to trigger his white supremacist base. Trump has to show that he can put "uppity negroes" in their place

Would anyone really be surprised if that’s what Trump was doing?

In retrospect, this season of America was clearly building up to a LaVar Ball-Donald Trump ladder match in the season finale.

Dale, a Washington correspondent for The Toronto Star, saw the humor in this situation, but it’s really an example that shows Trump lacks any sort of basic human decency.

How The Basketball Began Bouncing

LiAngelo Ball and fellow players Cody Riley and Jalen Hill were arrested last week for allegedly shoplifting sunglasses in a Louis Vuitton store while their team was in Hangzhou, China, per CNN. Our clueless leader said he asked Chinese President Xi Jinping to intervene and release the players.

Somehow President Jinping isn’t asking for a pat on the back and has managed to survive without throwing a pity party on Twitter. Perhaps Trump should take note of this. Because rather than noting anything useful to anyone on Twitter, he whined:

“Do you think the three UCLA basketball players will say thank you, President Trump? They were headed for 10 years in jail.”

Whether they were spurred by Trump’s “oh poor me” tweet or not, the players did, in fact, offer a formal apology. You can see it in the video below:

So what did LaVar Ball say that got Trump all worked up? Well, this:

“Who?” Ball asked ESPN when he was asked about Trump’s role in releasing the players. “What was he over there for? Don’t tell me nothing. Everybody wants to make it seem like he helped me out.”

Okay, so this wasn’t exactly glowing praise. But it shouldn’t have to be. Trump expects everyone to bow down to him. It’s kind of like he views himself as a king or something. And it’s a shabby thing for him to do. Because he isn’t king. He’s a man who can barely make it out of bed without gluing himself to Twitter, and he’s very likely the worst president this country has ever seen.

And that’s nothing he should be thanked for.