The United States Blues
Home National News Trump Whines To Hannity About How Tough The Shutdown Has Been On... 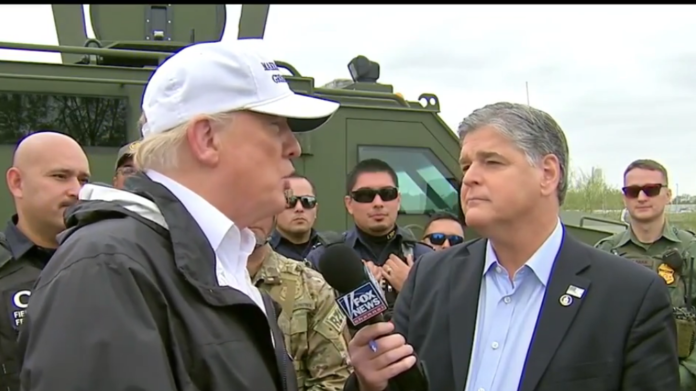 On Thursday, President Donald Trump traveled all the way to McAllen, Texas, for a photo-op at the border while the government remained in state of shutdown so he could again make the pitch for his long-promised wall that he expects American taxpayers to foot the bill for.

While he was in Texas, Trump stoked the fires of fear by warning that if the wall isn’t built, there will be much greater murder and death in the United States:

“If you don’t have it, it’s going to be nothing but hard work and grueling problems.

During his Texas visit, the president also gave an interview to Fox News host Sean Hannity, one of his most ardent and obsequious supporters in right-wing media. And Trump whined like a spoiled little brat who has been told he can’t have his way:

“I don’t need this! Look, I could have done something a lot easier, I could have enjoyed myself. I haven’t left the White House because I’m waiting for [Democrats] to come over in a long time. You know that.”

As if that wasn’t enough, Trump then complained that instead of sitting in the White House, he could be doing so many other great things. For example, he noted, going to the New Year’s Eve party at Mar-a-Lago:

Boo hoo! Poor Donnie had to stay at the White House instead of spending the holidays in Florida playing golf. Didn’t he tell us how badly he wanted this job? Then why is he so sullen about the fact that he has to do the work required?

Before he was finished, Trump tried to suggest that the shutdown he bragged he would gladly accept blame for, is all about politics:

“It’s about the 2020 campaign. Democrats aren’t feeling too good about it.”

But as any rational American can clearly see, it’s Trump who is playing politics with the lives of hundreds of thousands of federal workers who won’t receive a paycheck today. He’s holding them — and the entire country — hostage while he tries to extort billions of dollars for his pet project.

So whine on, Donald. The vast majority of the country knows you’re full of crap and borderline crazy. Oh, and you still don’t have a dime for your wall.