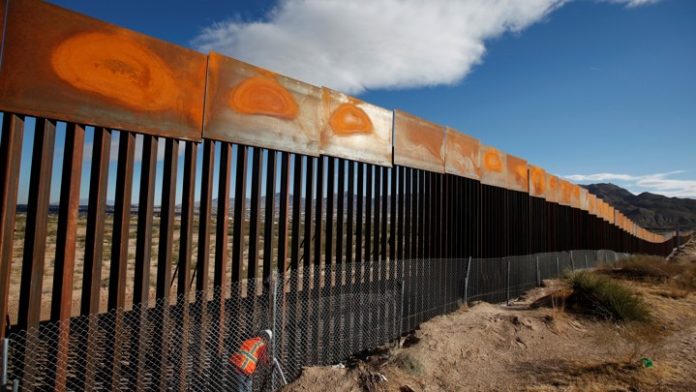 In the latest example of how President Donald Trump finds new ways to waste taxpayer money, CBS News reports that he has ordered members of the U.S. military who are deployed along the U.S.-Mexico border to paint large sections of the existing border barrier to improve the “aesthetic appearance” of the structure.

The Department of Homeland Security (DHS) told members of Congress about the plan on Wednesday:

Lawmakers were notified of the action on Wednesday in an email message from the Department of Homeland Security (DHS), which has asked the Pentagon multiple times in recent months to deploy troops near the southern border to support the agency as it faces an unprecedented surge of Central American families and unaccompanied children heading to or in between ports of entry.

The cost of the operation, including paint and equipment? A cool $150,000:

In its notification to Congress, DHS said painting of border barriers in Tucson, Arizona had allowed Border Patrol to combat the “camouflaging tactics of illegal border crossers” who sought to evade detection. The agency said migrants also appeared to have “greater difficulty” scaling painted bollards along the border.

Some barriers along the southwestern border, including in Nogales, have been painted white, a color which border officials say makes it easier for them to detect migrants compared to the typical brown color. Last month, however, The Washington Post reported that President Trump was pressing officials to paint the barriers black so that they would absorb heat and become too hot for migrants to climb.

Senator Dick Durbin (D-IL) noted that the painting project is a huge waste of taxpayer funds and military personnel:

DHS informed Congress today that troops are going to spend the next month painting the border wall & “the primary purpose is to improve the aesthetic appearance.” A disgraceful misuse of taxpayer $$. Our military has more important work to do than making Trump’s wall beautiful.

Rep. Joaquin Castro, chair of the Congressional Hispanic Caucus, said he agreed completely with Durbin that the plan is a “gross misuse” of the military, adding:

“These are soldiers, they are not painters.”

Knowing Trump’s gaudy taste when it comes to design, expect the color of the paint used to be gold and loaded with rhinestones. And he probably won’t be happy until TRUMP is emblazoned on the barriers at 100-foot intervals.