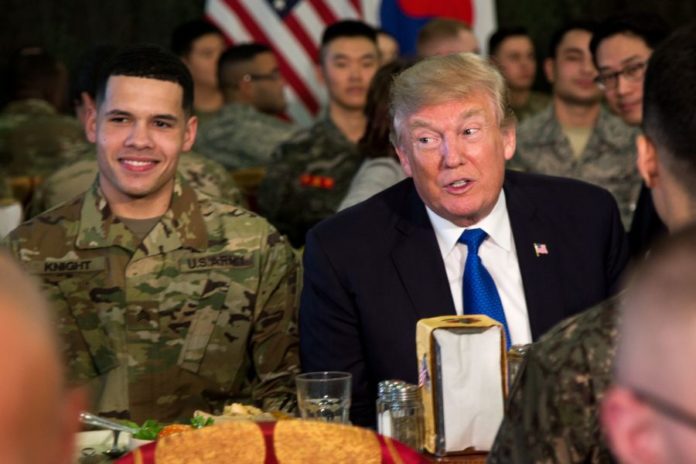 In order to help fund his wall on the U.S.-Mexico border, President Donald Trump has asked the Pentagon to flag $1 billion in funds earmarked for military pay and pensions, according to the Associated Press.

“It’s coming out of military pay and pensions. $1 billion. That’s the plan.

“Imagine the Democrats making that proposal — that for whatever our project is, we’re going to cut military pay and pensions.”

“When we’re not meeting our recruiting goals, the one thing that is not going to help attract new recruits is to say, ‘We might come after your pay, or not fund your other needs, to build the wall.’ If the question is whether or not Donald Trump would put his wall ahead of our troops and their families, we have our answer: Yes.”

The administration is also facing a revolt from members of its own party on the issue of Trump’s declaration of a national emergency. Last week, the House voted to overturn the declaration. The Senate is expected to vote next week on the resolution, and several Republicans have already said they won’t support the president on the issue.

Some GOP senators are already voicing concern about where Trump will choose to take money for the wall:

“Senators are increasingly uneasy ahead of voting next week because they don’t know exactly where the money to build the wall will come from and if it will postpone military projects in their home states.

‘It’s a concern,’ said Sen. John Cornyn, (R-TX). He said a number of senators have been talking to the White House about other ways the administration could shuffle the money without relying on the authority under the emergency declaration, which is likely to become tied up in litigation.

“The pitch is, ‘Why have this additional controversy when it could be done in a less controversial way?’ he said. ‘Apparently, the White House is not persuaded.'”

Saturday morning, Trump sent out this tweet on the subject of the wall:

Border Patrol and Law Enforcement has apprehended (captured) large numbers of illegal immigrants at the Border. They won’t be coming into the U.S. The Wall is being built and will greatly help us in the future, and now!

Actually, the wall is NOT being built, and Trump is on the verge of having both houses of Congress reject his plans for a monument to his ignorance and hatred.