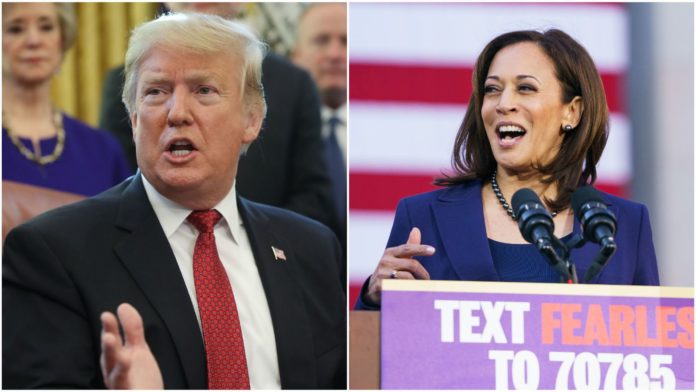 With her impressive performance at Thursday evening’s second Democratic debate, Senator Kamala Harris (D-CA) has seen her poll numbers increase dramatically, and she has also caught the attention of President Donald Trump, who is reportedly worried about her being the 2020 Democratic nominee.

At a news conference in Osaka, Japan, where the president is attending the G20 summit, Trump seemed to downplay the performance Senator Harris, according to NBC News:

Although he conceded that Biden “didn’t do well, certainly,” Trump said the facts might not have been on Biden’s side and that had he “answered the question a little bit differently, it would have been a different result.”

Speaking to reporters at a news conference after the G-20 summit in Japan, Trump said that the line of attack by Harris was “so out of the can,” suggesting it was rehearsed ahead of time.

“It wasn’t that outstanding, and I think probably he was hit harder than he should have been hit,” Trump said.

But inside the White House, there is growing trepidation about how tough Harris will be as an opponent if she wins the Democratic nomination, NBC White House reporter Kristen Welker said shortly after Trump made his remarks in Japan:

“I thought it was striking that Democratic debate happened on a night when he had six different bilateral meetings. He had one eye on the debate going on back at home, that’s for sure.

“He was asked to weigh in on that heated exchange between Senator Kamala Harris and Joe Biden when she questioned his history on race … He took the chance to take a swipe at Biden, no surprise there, but I thought it was very illustrative of the fact that the president has not quite figured out what his strategy is if he goes up against Kamala Harris.”

Welker added that inside the president’s reelection campaign, there’s a sense that Harris could be a major obstacle to Trump’s winning a second term:

“He’s been taking aim at Joe Biden for months now, but he has not figured out what will his line of attack be against Senator Harris. Privately those in his campaign have said she could be a formidable candidate in a general election.”

Kamala Harris is Donald Trump’s worst nightmare. She’s a strong woman of color who just so happens to be a former prosecutor. She’s eloquent, polished, and brilliant. And as she showed Thursday evening, she isn’t afraid to speak truth to power. Imagine her on a debate stage with Trump, ticking off the details of his attempts to obstruct justice found in the Mueller report. She might even cite all of the times the president has been accused of sexual harassment, assault, and rape.

Trump has no strategy for dealing with Harris because he’s afraid of what happens if he begins attacking her.