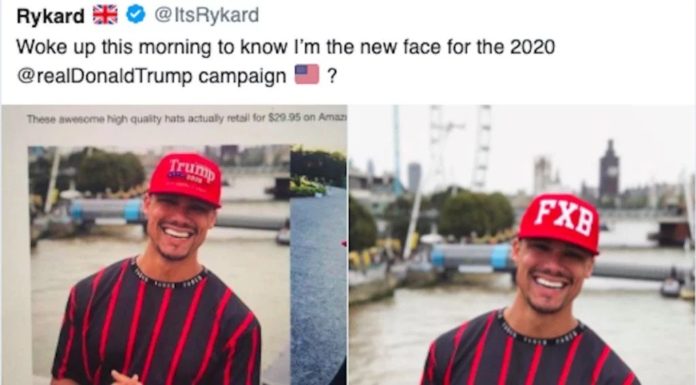 Rykard Jenkins got a rude surprise recently when he found out that a group pretending to be the 2020 Trump for president campaign decided to steal a photo of him and use Photoshop to turn him into an advertisement.

Woke up this morning to know I’m the new face for the 2020 @realDonaldTrump campaign 🇺🇸 ? pic.twitter.com/gl5SqPxKsj

Thing is, Jenkins isn’t even a U.S. citizen. He’s best known as a contestant on the British reality show “Love Island,” and the photo the Trump team appropriated was actually of him wearing a red baseball cap advertising the FXB brand, according to The Daily Dot:

Jenkins seems to have a sense of humor about the whole thing, maybe because being across an ocean from Trump creates enough distance to laugh about being turned into a Trump supporter against your will. He shared a picture of a local news story about the Photoshop job, joking about the Viagra warning below it.

Twitter lit up with responses to the appropriation of another person’s photo:

publicly touching our hair without consent is no longer the most racist thing you can do to a black person’s head https://t.co/bhxqepAbUP

I’m well-aware of the huge online effort on the Right to fake black support for Trump. They even made a bunch of fake twitter accounts using stock photos of black folks. But this…this is getting out of hand. 😭 pic.twitter.com/FJEIwIrOQH

Others on social media urged Jenkins to file a lawsuit against the Trump campaign:

Come on man. If you feel that way, you might as well be a Trump supporter.

If money is tight, all the more reason to sue the POS.

Find a lawyer and congrats on the bag you’re about to win https://t.co/0bPbNvb6TL

I wonder if Trump will be in the Guinness Record books for most lawsuits filed against an individual?…

This article originally said the Trump 2020 campaign was responsible for Photoshopping the MAGA hat onto Rykard Jenkins. It has been corrected to reflect that the culprits were pretending to be working for the Trump campaign. We apologize for the mistake.