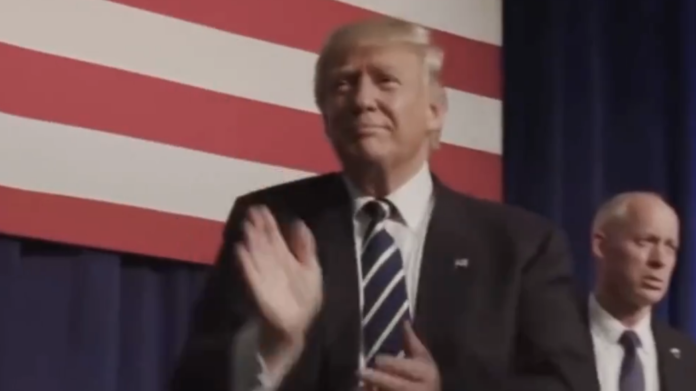 For some reason known only to him, President Donald Trump posted a two-minute video on Twitter Tuesday afternoon, and if this is what we can expect from the Trump 2020 campaign, then it’s going to be a interminably long election cycle.

The video begins with flash cuts of President Obama and Trump’s 2016 opponent, Hillary Clinton, along with these words that appear on the screen:

As if that isn’t more than enough, then we see several of Trump’s enemies (Rosie O’Donnell is one of them) and messages flashing across the screen like something out of a bad French New Wave film circa 1963 or an acid trip you’d rather forget.

Here, watch for yourself (if you dare):

The words that come to mind after you watch the video are likely these: Propaganda; poppycock; theater of the absurd.

And while the video is clearly laughable (albeit terrifying) and over the top, just the fact that Trump posted it on his Twitter account makes it an official presidential statement, direct from the president himself.

Social media was both outraged and amused by Trump’s pathetic attempt to make himself look like some sort of modern-day god, and the responses are priceless:

Okay, this is really frightening. We have a president who makes these propaganda videos you’d expect to see from Stalinist Russia or North Korea. And millions of brainwashed Americans eat this crap up. Meanwhile, we have an inept media that is powerless to do anything about it.

So it wasn’t just me? Because the first thing I thought was that this video was literally frightening.

Cool. Now I need a shower, five shots of tequila and then another shower to feel clean again.

First of all, nobody ignored your loud, boorish ass. Imagine ignoring someone the unnatural color orange yelling his head off.

But yeah, still laughing at you.
And racist is as racist does, so yeah, that continues.

I’m curious – which state of “great” was better than what you have now?

If no, then I can only conclude that you are longing for the time before catastrophic climate change. That is the only thing that’s worse now than ever before.

Lol. You are such an idiot. You are the one that’s ruined America…so yes, GET OUT & AMERICA WILL BE GREAT AGAIN!
P.S. Still lusting after President Obama I see. 😏😏