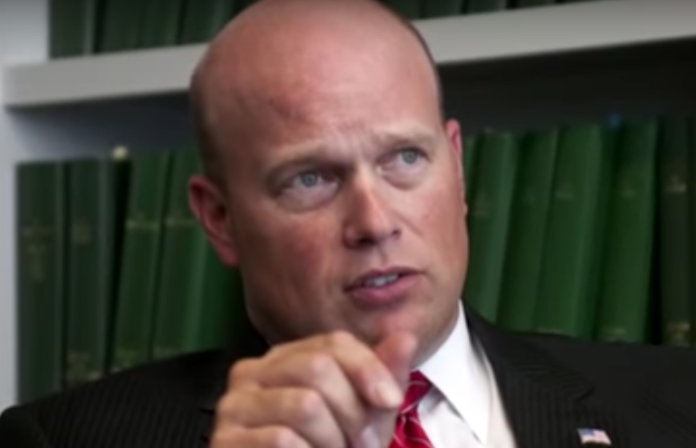 Whitaker took control of the Justice Department earlier this week after Trump forced Jeff Sessions to resign. But Trump put Whitaker in charge by appointing him, which is unconstitutional since principal government officers such as the Attorney General must be nominated by the president and then confirmed by the US Senate before they can take office.

Adding to the outrage over Trump’s choice is the fact that Whitaker has made denigrating remarks about LGBT Americans and is currently under FBI investigation for fraud.

But now Whitaker is under fire for remarks he made in 2013 which seriously calls into question how he intends to run the Justice Department.

As it turns out, Whitaker expressed his belief in 2013 that states can nullify federal laws in response to the Affordable Care Act, also known as Obamacare.

“As a principle, it has been turned down by the courts and our federal government has not recognized it,” Whitaker said. “Now we need to remember that the states set up the federal government and not vice versa. And so the question is, do we have the political courage in the state of Iowa or some other state to nullify Obamacare and pay the consequences for that?”

“The federal government’s done a very good job about tying goodies to our compliance with federal programs, whether it’s the Department of Education, whether it’s Obamacare with its generous Medicare and Medicaid dollars and the like,” he continued. “But do I believe in nullification? I think our founding fathers believed in nullification. There’s no doubt about that.”

In fact, the founding fathers believed in federal supremacy, which is why they wrote the Constitution to replace the Articles of Confederation in 1787.

Furthermore, the Supreme Court has repeatedly backed federal supremacy in rulings going all the way back to 1796.

And the Civil War settled the question once and for all when the Union defeated the Confederacy.

Nullification is simply not supported by history or the law, and Whitaker’s belief otherwise disqualifies him from being Attorney General. After all, how can the American people trust that he will defend the Constitution if he thinks the states have the power to nullify it?