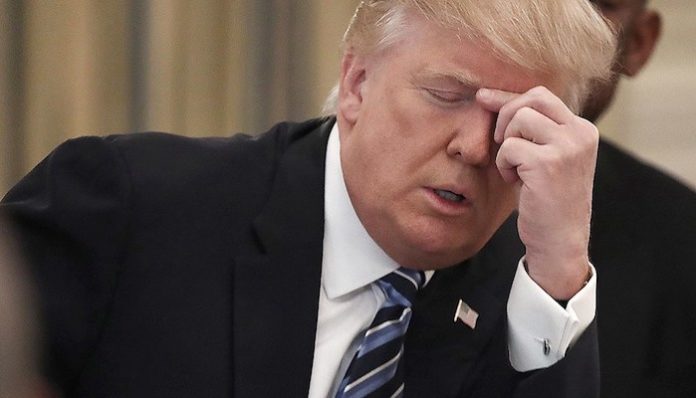 Looks like President Donald Trump finally came in first without having to cheat: His current approval rating is the lowest of any American head of state in history.

A new ABC News/Washington Post poll shows that Trump’s average approval rating stands at 38 percent, which is a full 23 points lower than the average approval (61 percent) for the 12 presidents who preceded him from 1945, when the very first approval polls began.

By way of contrast, Barack Obama averaged 55 percent approval during his first two years in office. Bill Clinton’s stood at 51 percent at the halfway point of his first term. And John F. Kennedy was at 74 percent at the two-year mark of his presidency.

Fully 58 percent of Americans now say they disapprove of the job Trump is doing as president, and the government shutdown helped pull his approval rating to an all-time low of 37 percent just a week ago.

It’s also instructive to note that Trump’s approval numbers have never been above the 50 percent mark since he took office.

And while Trump continues to claim that the majority of Americans want a border wall, polling also shows that to be an outright lie, the Washington Post reports:

“Polls have consistently shown that a majority of Americans do not support the wall. The Post-ABC News poll finds that 54 percent oppose the project, with 42 percent supporting it, matching the results of a Post-ABC poll two weeks ago.”

Despite those dismal numbers, Trump went on an extended tweet storm Saturday morning, trying to build support for the wall:

21 days goes very quickly. Negotiations with Democrats will start immediately. Will not be easy to make a deal, both parties very dug in. The case for National Security has been greatly enhanced by what has been happening at the Border & through dialogue. We will build the Wall!

We have turned away, at great expense, two major Caravans, but a big one has now formed and is coming. At least 8000 people! If we had a powerful Wall, they wouldn’t even try to make the long and dangerous journey. Build the Wall and Crime will Fall!

If he decides to shut the government down yet again on February 13, when the current temporary spending bill expires, Trump could well see his approval ratings dip into the 20s. Would the GOP finally abandon him then?