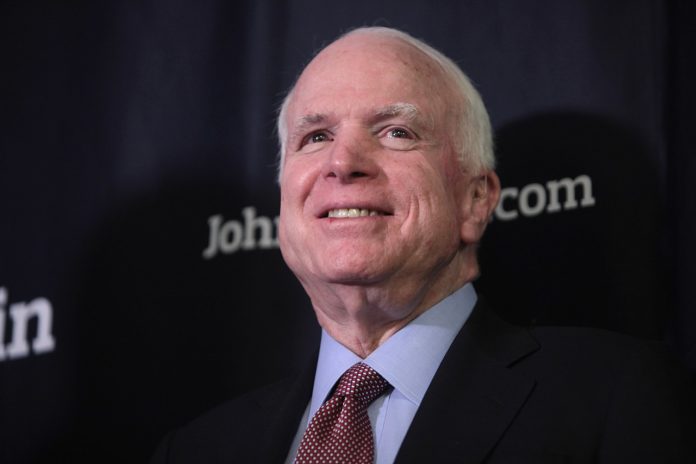 The Republican National Committee (RNC) attempted to wish President Donald Trump a happy birthday on Friday and suck up to him at the same time. Little did they know that Twitter users were prepared to hijack the day for true patriot John McCain.

In a birthday message on Twitter, the RNC called Trump a “great” president and asked everyone to retweet to do the same.

RT to wish our GREAT President a HAPPY BIRTHDAY! pic.twitter.com/OOMKAzReqV

But Bill Maher is not the only one who mocked Trump on his birthday. Twitter users did as well and literally hijacked the day and declared it John McCain Day to honor the late-senator and war hero instead of a five-time draft dodger who disgraces the presidency.

A war hero and the best president ever. pic.twitter.com/0vbySSc4sV

Resign. Give the world a gift.

Happy John McCain Day, he was a true AMERICAN hero and Patriot!#JohnMcCainDay pic.twitter.com/Zp1uaXcaur

Sending out good wishes for everyone to have a Happy #JohnMcCainDay. John McCain was a true American hero who served our country with honor and did not shy away from his duties when he was called. As a nation, we are all indebted to this patriotic man of courage. pic.twitter.com/JDxBJSLjfj

“Glory belongs to the act of being constant to something greater than yourself, to a cause, to your principles, to the people on whom you rely and who rely on you” – John McCain #JohnMcCainDay pic.twitter.com/itHcBF6GUy

He likes presidents who don’t collude with foreign governments to win an election. #HappyJohnMcCainDay pic.twitter.com/ODw2VJamj8

probably not his real birthday. Where’s his birth certificate? LOL

Republicans are worshiping Trump like a dictator, but Trump is not deserving of such adulation and he certainly does not deserve birthday wishes. McCain, on the other hand, deserves a day honoring his memory and sacrifice and there is no better day to honor him than June 14th. Because if Americans are going to honor someone on this day, it should not be Trump. And we should lobby Congress to recognize June 14th as a national holiday to celebrate McCain’s life and service to our country. Then we can watch Trump fume about it.