The United States Blues
Home Elections Trump’s campaign team thinks they can win in 2020 by reaching out... 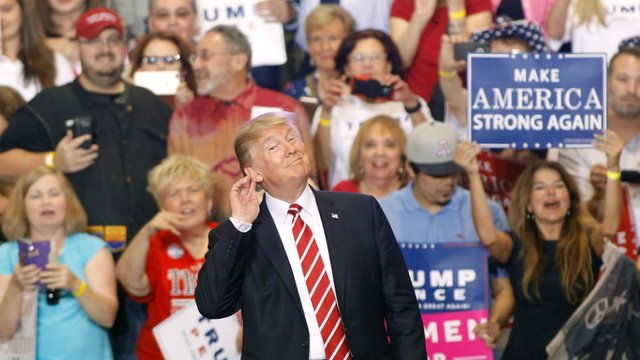 With numerous polls showing him losing badly to several of the 2020 Democratic candidates who are hoping to unseat him, President Donald Trump and his re-election team are focusing on an unlikely source of votes in the key state of Florida: Hispanics.

The campaign plans to use Florida as a proving ground for a Latino outreach initiative, hoping to replicate the statewide 2018 midterms when Democrats failed to turn out this liberal-leaning segment of the electorate.

“Florida is a unique state for a lot of reasons, and the varied Latino population is one of them. It is the perfect place to soon be launching our Latino coalition. The Latino community is not monolithic in Florida, just like in the rest of the country, and we will have people from these diverse communities speaking to their friends and neighbors on the president’s behalf.”

Keep in mind that this is the very same Donald Trump who on Tuesday morning threatened to begin deporting millions of immigrants from the United States, the majority of whom are Hispanic:

Next week ICE will begin the process of removing the millions of illegal aliens who have illicitly found their way into the United States. They will be removed as fast as they come in. Mexico, using their strong immigration laws, is doing a very good job of stopping people…….

….long before they get to our Southern Border. Guatemala is getting ready to sign a Safe-Third Agreement. The only ones who won’t do anything are the Democrats in Congress. They must vote to get rid of the loopholes, and fix asylum! If so, Border Crisis will end quickly!

But there may well be a problem with the Trump 2020 strategy as it relates to Florida, and the president has no one to blame for it but himself:

However, Florida has the nation’s largest Puerto Rican population: They make up about a third of the state’s Hispanic voters, which in turn accounts for about 16 percent of the state’s registered voters. Poll after poll shows Trump’s numbers with this segment of the electorate are poor. Trump’s strong standing with Republican-leaning Cuban Americans, though, helps counteract the antipathy in the Puerto Rican community.

Also, Democrats aren’t about to concede the Sunshine State to Trump given how well gubernatorial candidate Andrew Gillum did in 2018, and they’re countering the president’s re-election plans with their own strategy:

Juan Peñalosa, executive director of the Florida Democratic Party, said the campaign has launched a Spanish-language radio program to counter the Trump campaign’s outreach to the state’s growing Venezuelan population. He said Venezuelans dislike the president’s refusal to grant temporary protected status to immigrants from the South American country as its economy crumbles under the dictatorship of Nicolás Maduro.

If Donald Trump thinks he can squeak out a victory next year by appealing to Hispanics, he’ll also have to hope they haven’t heard a word he’s said on the issue of immigration since he became president. As usual, Trump may well be his own worst enemy.