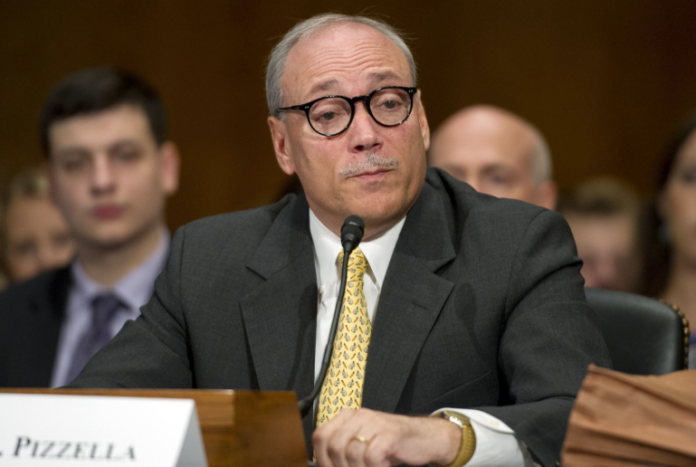 Another cabinet member in President Donald Trump’s administration has resigned, largely due to the furor caused by a plea deal with Jeffrey Epstein. Trump announced Friday that Labor Secretary Alex Acosta is stepping down, effective Friday, July 19, CNN reports.

Acosta has faced plenty of scrutiny over his former role as the U.S. Attorney in Miami in 2008 when he negotiated the plea deal with Epstein. Because he’s well-connected, Epstein, a multi-millionaire, managed to avoid a federal trial. As a result, he spent a mere 13 months in prison on state prostitution charges regarding his involvement with underage girls. The Miami Herald, as part of an investigation last November described the plea deal as the “deal of a lifetime.”

Trump has chosen Deputy Secretary of Labor Patrick Pizzella to temporarily replace Acosta on an acting basis, Mother Jones reports. But if you think he may be a respectable Labor Secretary you may wish to guess again.

Because Pizzella has a particularly ugly skeleton in his closet.

Mother Jones pored over hundreds of pages of billing records and emails and found Pizzella promoted sweatshops in the Northern Mariana Islands while working with disgraced lobbyist Jack Abramoff in the 1990s.

During his July 2017 Senate confirmation hearing, Pizzella claimed he didn’t remember much about his efforts to help the Mariana Islands (a U.S. commonwealth that’s about 1500 miles from Japan) defeat a bipartisan effort to scupper a guest worker program. An investigation by the Labor Department found the program used indentured workers.

That led then-Sen. Al Franken (D-Minn.) to ask Pizzella if he knew about forced abortions and routine beatings.

“I was not aware of any such thing,” Pizzella told Franken.

Pressed further, he claimed reports of abuse by numerous government agencies and newspapers were nothing more than “allegations.”

However, it’s what Pizzella didn’t say that’s more telling. Journalists at Mother Jones found that Pizzella led a public relations campaign that aimed to rebrand the islands as a free-market paradise. Billing records and emails from 1996 to 2000 show that Pizzella and his colleagues offered more than 100 members of Congress paid trips to the islands with all expenses paid. Those offers were also extended to congressional staffers and conservative thought leaders. And when everyone came home, Pizzella was on hand to help them convince their colleagues that the Northern Mariana Islands were the perfect “laboratory of liberty,” a term coined by his old boss, Abramoff.

And as Deputy Labor Secretary, his treatment of the island’s workers was despicable, CNBC notes. As part of Abramoff’s team at Preston Gates Ellis & Rouvelas Meeds, Pizzella and his colleagues at the lobbying firm tried to prevent Congress from minimum wage laws on the islands. At this time there were “maximum” wage restrictions on the islands — a mere $3.05 for foreign workers, according to the Center for Investigative Reporting.

If you think that’s bad, this report reveals something that’s even worse:

“Foreign workers pay up to $7,000 to employers or middlemen for the right to a job in the CNMI (Commonwealth of Northern Mariana Islands),” the report said. “When they finally reach the commonwealth, they are assigned to tedious, low-paying work for long hours with little or no time off. At night, they are locked in prison-like barracks.”

In 2006, Abramoff was sentenced to six years in prison on fraud-related charges but was released in 2010.

But even with this shameful information, Trump has seen fit to nominate Pizzella as acting Labor Secretary. Who knows how workers rights will suffer with him in office. He’s just another one of Trump’s bad choices but it’s the rest of us who will suffer.

Featured image courtesy of the video above