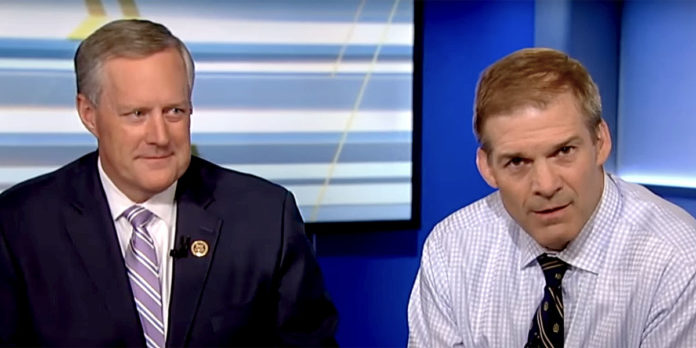 When he testifies before the House Judiciary and Intelligence Committees on July 17, Robert Mueller can expect to be pelted with accusations that he’s the ringleader of a “coup” to take down President Donald Trump, according to a new report from Politico:

Among those who will go after Mueller are longtime Trump acolytes Reps. Jim Jordan (Ohio), Matt Gaetz (Fla.), Devin Nunes (Calif.). and Andy Biggs (Ariz.), all of whom have said from the beginning of the Russia investigation that the special counsel is biased against the president:

“It becomes reader’s theatre,” predicted Biggs, a member of the Judiciary Committee. When pressed on whether he thought the high-profile hearing could backfire for Democrats, the Arizona Republican replied with a smile: “I certainly hope so.”

Democrats, on the other hand, will use the hearings in order to bring Mueller’s findings into the mainstream so they can be better understood by the American public:

They’ve lamented that since Mueller’s redacted final report became public in mid-April, few Americans have actually read the document; instead it has been filtered through the lens of TV newscasts and cable punditry. A growing contingent of House Democrats who favor launching impeachment proceedings against Trump, largely because of what Mueller found, say they hope his on-camera recitation of his findings accomplish what the last two months haven’t.

But being too dismissive of Mueller could also wind up backfiring badly on House Republicans, according to Paul McNulty, who was a deputy attorney general in the George W. Bush administration Justice Department while Mueller was FBI Director:

“Bob will stick with Marine-like discipline to his battle plan of staying within the four corners of his report. Members will say much more with their statements than he will say with his answers.”

“I think Mueller will be extremely prepared,” he said. “He’ll present factually compelling — and my guess would be an emotionally powerful — defense of the good faith and patriotism of his team.

“I think the claims of bias or flawed procedures or misuse of the FISA court that have been made, as far as I’ve seen, don’t have a credible foundation and I think Mueller will be able to expose how small and political those charges are, especially when put up against the gravity of the attack on our election and foreign interference on our democracy that his report documents.”

No matter what happens, it promises to be compelling, must-see television.