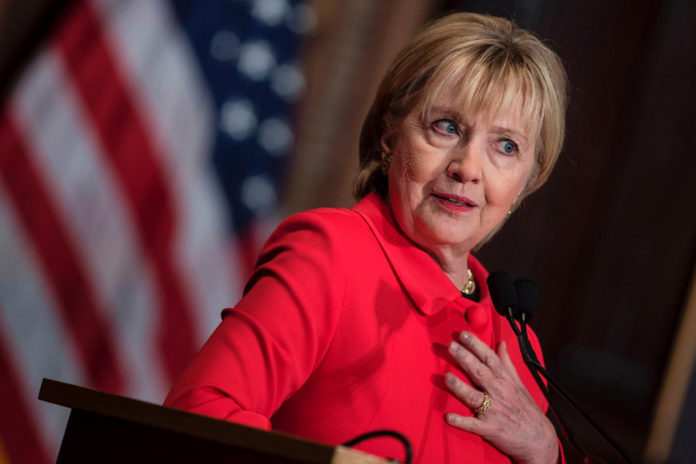 Donald Trump cannot leave the election behind him

The president is pressuring the Justice Department to investigate Hillary Clinton in an apparent attempt to take our attention away from the swiftly growing avalanche that is the Mueller investigation.

Trump specifically pressured the FBI to investigate Clinton, citing issues with the nominee and her party. He urged law enforcement to “do what is right and proper.”

Is it appropriate for an incumbent president to push for a criminal probe of his political opponent? Was it ever appropriate? When are we going to say enough is enough with his “Crooked Hillary” rhetoric?

Donna Brazile’s admission that the DNC stacked the primary for Hillary is appalling. But pay no mind to the president. Trump is using the same dirty tactic he’s always used – taking from progressive talking points and twisting them to cater to a far-right audience.

Trump sat down for a radio interview on Thursday and said “the saddest thing” about being president is that he is not supposed to give orders to the Justice Department or the FBI. He claimed to be “very frustrated” that he could not be involved with those agencies and said that it was “very discouraging to me” that they were “not going after Hillary Clinton.”

People, why are we giving this man airtime? He’s blame-shifting like he always does.

“Hopefully they are doing something and at some point, maybe we are going to all have it out.” – Trump on “The Larry O’Connor Show”

“A lot of people are disappointed in the Justice Department, including me,” Trump told reporters as he departed the White House on his way to Asia.

He referred to Clinton and Sanders as “Crooked Hillary” and “Crazy Bernie.”

He also couldn’t help himself from referring to Elizabeth Warren as “Pocahontas.”

The Justice Department enjoys a measure of independence from the White House. This is to protect specific investigation and prosecutions from becoming politicized. Obviously, the dynamic needs to remain this way.

Trump doesn’t seem to have a clear understanding of checks and balances.

During his radio show appearance, the president also took it upon himself to go after the Trump dossier.

“I look at what’s happening with the Justice Department, why aren’t they going after Hillary Clinton with her emails and with her dossier, and the kind of money…I don’t know, is it possible that they paid $12.4 million for the dossier…which is total phony, fake, fraud, and how is it used? It’s very discouraging to me. I’ll be honest.”

Trump has provided no evidence for the $12.4 million figure. Fusion GPS, the firm that commissioned the dossier, paid former British spy Christopher Steel $168,000 for his research, according to Reuters.