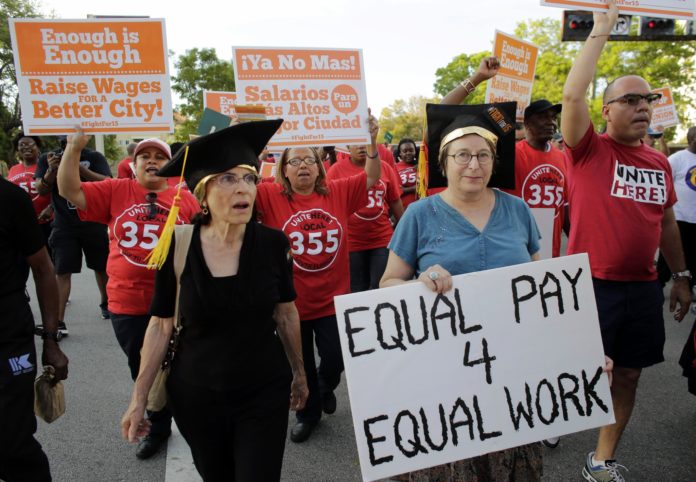 The Equal Employment Opportunity Commission (EEOC) is preparing to eliminate an employment reporting rule which requires employers to prove they’re complying with equal pay rules that were put into place during the Obama administration.

The agency posted notices Wednesday in the federal register and on its website saying that it would be ditching regulations put in place in 2016, when the EEOC was led by Democrats. The rules required large companies to provide the government with data on employee pay broken down by gender, race and ethnicity.

The Trump administration has been opposed to those rules since 2017, calling them a burden on business, with the White House Office of Management and Budget issuing a memo to the EEOC that same year announcing it would no longer collect the data. But a court ruling earlier this year ordered the EEOC to comply with the rule and gather the information for 2017 and 2018.

But now the EEOC says effective 2019, that requirement no longer applies, which will likely result in another battle in federal court.

All of this is the result of actions taken by Trump’s Senate-confirmed appointee to head the EEOC, Janet Dhillon, who previously worked as general counsel for Burlington Stores and JCPenney.

Senator Patty Murray (D-WA), the ranking Democrat on the Senate Health, Education, Labor, and Pensions Committee, said the EEOC under Trump is trying to “sweep pay discrimination under the rug,” adding:

“We need to address the wage gap that leaves so many women and people of color being paid less for doing the same work as others. And let me be clear: You don’t solve problems by hiding them and you don’t fight for workers by shielding corporations from accountability.”

Information released by the Census Bureau last week shows that U.S. businesses have a long way to go before they achieve equity in salaries:

Women now earn, on average, 82% of what white men make. The numbers are significantly worse for black women (62%) and Latinas (54%)

The gap has only closed by four percentage points since 2007, when women made, on average, 78% of what men then earned.

And now, apparently, that gap is free to increase and no one will even know it’s happening thanks to the Trump administration’s willingness to let businesses get away with whatever discrimination they want as long as it pads their bottom line.