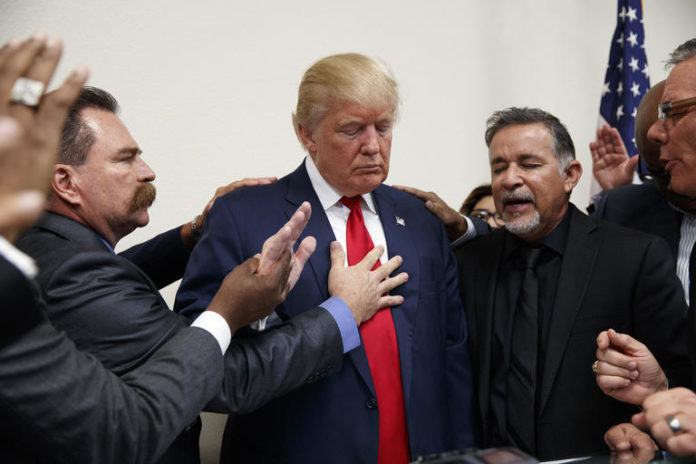 President Donald Trump loves to say that he has done more for religious freedom and liberty than any president in history. And evangelical Christians overwhelmingly support him, even though he doesn’t darken the door of church on Sundays.

On Monday, Trump tried to strengthen his ties to American Christians, tweeting out his support for Bible literacy courses, which he said were “great.”:

But while Trump may say the right things when it comes to the subject of religion, his actions certainly suggest that he’s anything but a model Christian, and now his former pastor is calling him out for being a hypocrite.

Pastor David Lewicki, who was a pastor at New York City’s Marble Collegiate Church for about five years said Trump was a member of the church, but never showed up for services or Bible study, rebuking the president on social media:

I was @realDonaldTrump‘s pastor for 5 years @MarbleChurch. I assure you, he had the “option” to come to Bible study. He never “opted” in. Nor did he ever actually enter the church doors. Not one time. https://t.co/hf06e6LyRz

“Hypocrisy can afford to be magnificent in its promises, for never intending to go beyond promise, it costs nothing.” -Edmund Burkehelp

After Lewicki’s tweets received a great deal of attention, he told HuffPost his intention was to draw attention to Trump’s complete lack of a religious track record:

“He was not an active and visible member of the church, no.”

But perhaps worst of all is the fact that while Trump aligns himself with Christianity, his words, deeds, and policies all speak to something less than a Biblical perspective on how one should treat their fellow man. Is it in keeping with the teachings of Jesus to deny refuge to those who seek it? Does it comport with the message of Christ to enrich the richest in society while cutting back on programs that help the neediest in American society?

While Donald Trump may enjoy hobnobbing with Bible thumpers and even have one serving as his vice president, he certainly doesn’t live in a manner consistent with the Christian ideals of meekness, humility, charity, and goodwill toward others. And that alone proves what a disgustingly vile hypocrite the current president is.