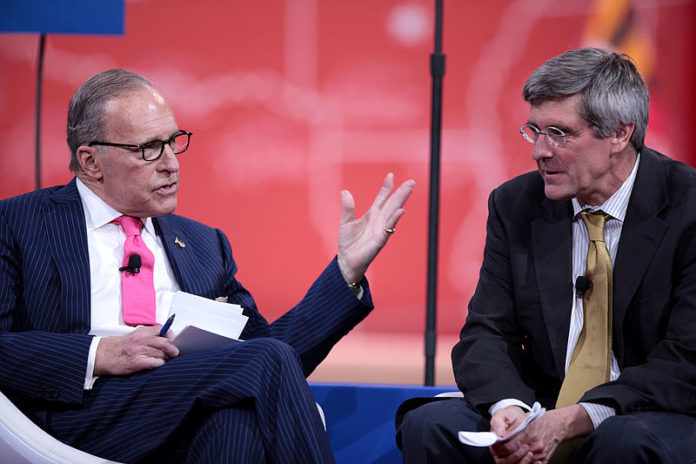 President Donald Trump’s recent moves to install cronies such as Stephen Moore and Herman Cain on the Federal Reserve Board is raising fears of politicization, a threat to the monetary independence that has existed for decades. And Trump economic adviser Larry Kudlow is defending it.

Washington Post business columnist Catherine Rampbell has already sharply criticized Trump’s selection of Moore and Cain because they are sycophants who will increase Trump’s power over the Federal Reserve, which exists to take politics out of monetary policy and make the best decisions for the health of the economy.

Trump has repeatedly attacked the Federal Reserve for raising interest rates, which is what it is supposed to do in the current state of the economy. Trump argues that keeping rates low would improve the economy even more, but that ignores the reality that his trade wars and tax cuts are contributing to recession fears.

In fact, experts are alarmed by Trump’s attempt to seize control of the Federal Reserve.

According to Agence France Presse:

For Michael Gapen of Barclays Research, the president’s choices “could raise questions about the independence of the Federal Reserve and could be perceived as an attempted politicization of monetary policy.”

Tim Duy, economics professor at the University of Oregon and an expert on the central bank, told AFP that he believes “the threats to the Fed independence are at the highest in decades.”

“Donald Trump is very mad at (Fed chair) Jerome Powell and his colleagues for continuing to raise the interests rates (in 2018) and realizes he has a role to play here. He can appoint whoever he wants to the Fed,” added Duy.

“So far Fed watchers really believed the Fed was going to be the only agency that would be able to stand the turmoil of Washington and I think we are seeing it’s obviously not true,” mp’s uT

Trump’s handpicked Economic Advisory Board chief, Larry Kudlow, shamelessly defended the effort as if he was a neutral observer.

“It’s a free country and the president has a lot of well-informed opinions as a successful businessman and investor,” Kudlow said. “We are not pressuring. We are not going after their independence but we have our point of view.”

And that point of view could become disastrous for the country if Trump has his way on Federal Reserve policy.

Rampbell has warned that Moore would likely base his decisions on the Federal Reserve Board on what policies make Republicans look good and what policies will make Democrats look bad. In short, he would make recommendations that might juice the economy in the short term to help his own party and sabotage the economy when Democrats are in power. Cain, meanwhile, is a grifter who will make decisions to help himself and his allies. That is not how monetary policy in this country works, and it will only cause unnecessary instability that will hurt ordinary Americans and millions of people around the globe.