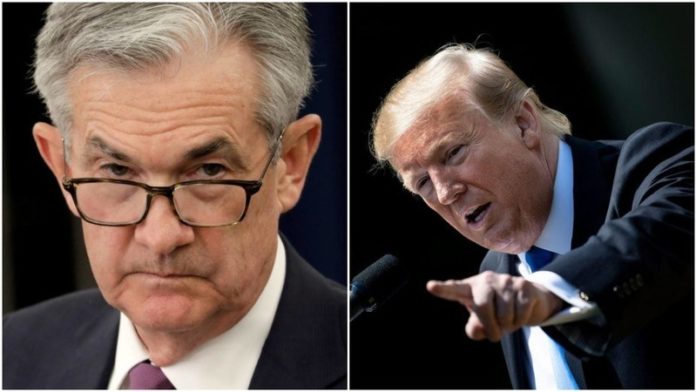 When he announced a modest interest rate cut on Wednesday — the first since the 2008 financial crisis — Federal Reserve Chairman Jerome Powell also completely blew up claims from President Donald Trump and his GOP cheerleaders that the U.S. economy is in great shape.

Remember how Trump and Republicans in Congress tried to sell their 2017 tax scam plan as guaranteed to boost economic growth? Problem is, most of that tax cut went to large corporations and the wealthiest Americans, but didn’t help anyone else, which Powell confirmed when he said:

“The manufacturing and business investment part of the economy is not growing very much.”

Manufacturing and business investment are two of the most crucial markers for the health of the economy, and Powell admitted that both are sickly.

Powell also indicated that Trump’s ongoing trade war is doing more harm than good to the vitality of the U.S. economy, remarking in the Federal Open Markets Committee statement:

“In light of the implications of global developments for the economic outlook as well as muted inflation pressures, the committee decided to lower the target range for the federal funds rate.”

Powell added that the rate cut is being done as a hedge against “downside risks from weak global growth and trade tensions.”

So, in other words, despite Republican boasting about a booming economy, a massive $1.5 trillion tax cut, a wild deregulatory push, and Trump’s imagined dealmaking talents being applied to the global trade arena, the Fed chair thinks the economy is at risk enough that he should take a step the reserve bank hasn’t taken in over a decade.

In essence, the economy is so incredibly strong that a rate cut was necessary to keep the country from falling into recession. That’s a big departure from what the president has been saying endlessly on Twitter. For example:

Republicans have created the best economy in the HISTORY of our Country – and the hottest jobs market on planet earth. The Democrat Agenda is a Socialist Nightmare. The Republican Agenda is the AMERICAN DREAM! https://t.co/0pWiwCHGbh pic.twitter.com/JfdM1p5xxY

That was posted the day before the 2018 midterm election. How did the “best economy in the HISTORY of our Country” deliver for Trump and his party? They lost control of the House and barely kept control of the Senate.

Donald Trump has long promised that the United States would win so much under his leadership we’d grow tired of all the winning.

But the first rate cut from the Federal Reserve in 11 years doesn’t exactly suggest anyone is winning, does it?