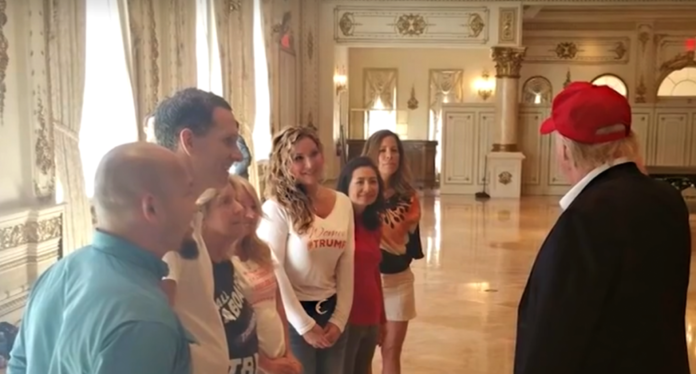 While President Donald Trump campaigned on putting “America First,” and hiring American workers, his actions with his own properties show that concept doesn’t apply in his case. Instead of hiring Americans to work at Mar-a-Lago or other Trump properties, he hired almost exclusively foreign nationals from Mexico, Jamaica, and Guatemala.

In order to do so, he actually asked for a marked increase in H-2B visas from the Department of Homeland Security. Cenk Uygur, host of The Young Turks noted that:

“This is the only part of immigration that Trump has increased.”

Three days after the Department of Homeland Security temporarily raised the cap on H-2B visas from 66,000 to 81,000 in the fiscal year 2017, Trump properties asked for permission to hire 76 workers. Do you see a connection?

Mark Krikorian said of Trump’s expansion of the H-2B program that:

“It’s a bullshit law written to ensure that employers don’t have to hire Americans,”

Krikorian is the executive director of the Center for Immigration Studies.

Vox conducted an analysis of three Trump properties in New York and Florida from 2016 to the end of 2017, and shockingly determined that out of 144 job offerings, only one American was hired, in the position of cook.

The typical excuse for hiring foreign workers might be that no Americans wanted to fill the positions, but these weren’t like the labor-intensive agricultural jobs covered by the H-2A program.

These were jobs for servers, cooks, bartenders, and housekeepers –when there were surely qualified Americans living in Florida and New York.

Below is the pay Trump’s properties offer, which is comparable to pay for similar job openings. Were Americans really not interested in those jobs, even if they were seasonal?

The hiring manager at Mar-a-Lago claimed that out of all their job offerings, only seven Americans responded, and they were “unqualified, uninterested, or did not return calls.”

At two other Trump properties, hiring managers claimed that there was not a single U.S. worker who applied for job offerings.

Part of the problem appears to be that Trump’s hiring managers were going out of their way not to find American applicants.

An August 2017 report from The Washington Post revealed that one of Trump’s advertisements for jobs at Mar-a-Lago was posted in the local Palm Beach Post in tiny print using classified ad shorthand. The ad left out crucial contact information, offering only the option to “apply by fax.” Is this to be taken as a serious effort to find local candidates?

It’s not like it is an easy process to hire foreign workers in the first place.

Before hiring foreign workers, the employers have to go through a considerably difficult process, receiving and offering a wage determined by the Department of Labor, then sending a work order to the state workforce agency, and finally advertising the job offer in a local newspaper.

Only when they can’t find acceptable applications by U.S. residents may they receive permission from the Department of Labor to hire the foreign workers, and then those workers go through a rigorous process before they start work. In Trump’s case, his properties hire a staffing company, Petrina Group, to navigate the system for him.

Are we really to believe that no qualified Americans were available to take these jobs, and is the government actually checking to see if Trump’s hiring managers were accurately portraying the situation?

For more see commentary from The Young Turks below: