The United States Blues
Home Fun Stuff Another Member Of Trump’s Inner Circle Has A Slip Of The Tongue... 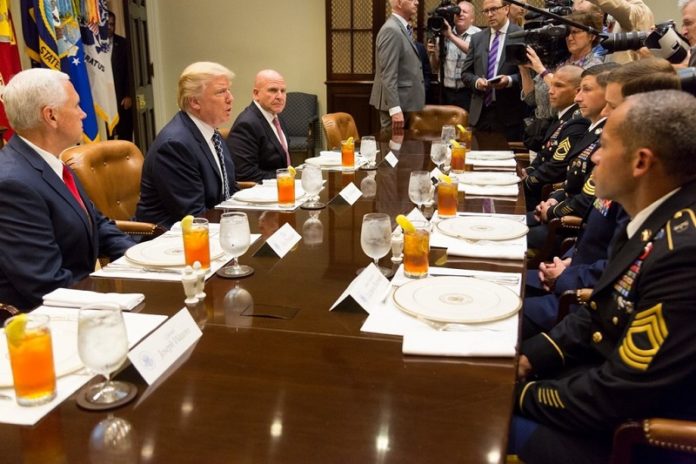 Ah… the good old days. Remember when Secretary of State Rex Tillerson called President Donald Trump a moron? While Tillerson never actually confirmed that he had called his boss a moron, he never did deny it either. Trump challenged Tillerson to an IQ test, and Mensa piped up volunteering to administer the challenge. Those were the days…

Almost everyone has taken a poke or two at Trump. His former professor said he was the dumbest kid in the class. And now Trump’s lack of intelligence is back in the news again. This time it was his own National Security Adviser, Lt. General H.R. McMaster.

During a dinner with Oracle Software’s CEO, Safra Catz, McMaster reportedly told Catz that Trump has an intelligence level equal to a Kindergartner. Catz then told some other people, who told BuzzFeed News. From a report in BuzzFeed News:

Over a July dinner with Oracle CEO Safra Catz — who has been mentioned as a candidate for several potential administration jobs — McMaster bluntly trashed his boss, said the sources, four of whom told BuzzFeed News they heard about the exchange directly from Catz. The top national security official dismissed the president variously as an “idiot” and a “dope” with the intelligence of a “kindergartner,” the sources said.

While five sources initially verified the remarks, no one actually seems to want to go on record as having heard them, including Catz. When BuzzFeed tried to verify the report from “unnamed sources,” they were met with a brick wall of denial. Michael Anton, National Security Council spokesman, stated:

Actual participants in the dinner deny that General McMaster made any of the comments attributed to him by anonymous sources. Those false comments represent the diametric opposite of General McMaster’s actual views.

BuzzFeed found a secondary source who was not at the dinner, but verified that:

McMaster had made similarly derogatory comments about Trump’s intelligence to him in private, including that the president lacked the necessary brainpower to understand the matters before the National Security Council.

We have long been told about Trump’s need to hear only good things about himself — which is carried out by his staff almost religiously and to the degree that keeps the president in his delusional little world. If you never hear the bad news, you cannot possibly get an accurate picture of the state of affairs in the real world.

Some have labeled the statements by McMasters as a political gaffe, or a Kinsey Gaffe, which is defined as:

A Kinsley gaffe occurs when a political gaffe reveals some truth that a politician did not intend to admit. The term comes from journalist Michael Kinsley, who said, “A gaffe is when a politician tells the truth – some obvious truth he isn’t supposed to say.”

If the statements were indeed made, it gives us a very vivid picture of how his top staffers view the Child-in-Charge. It puts into perspective the middle-school bully antics we see on Twitter constantly and is a great cause for concern. It will be interesting to see the fallout from this on McMaster’s job stability — which will undoubtedly play out via Twitter over the next several days until he resigns or is fired.

While many of us “normal citizens” have long believed that something was amiss with Trump’s mental state and intelligence level, his staff have always defended him. How much longer can top staffers continue to pretend that everything in the White House is hunky-dory when they seem to have lost all respect for the man-child that they work for?