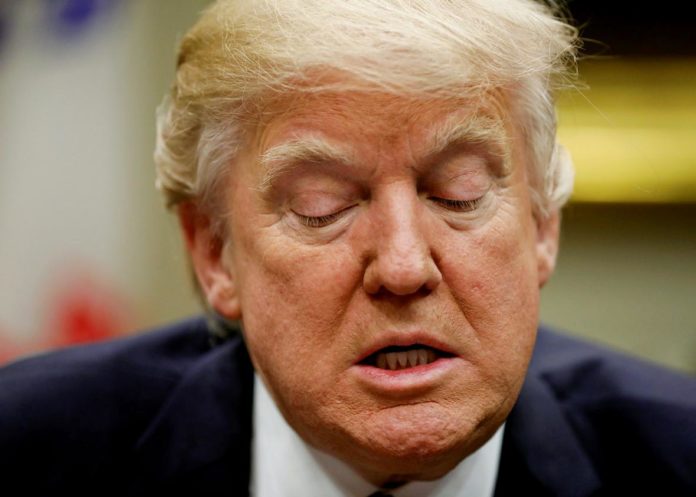 President Donald Trump’s job approval rating is down significantly in a new Gallup poll, placing him below 40 percent, a slip of four points from February.

The poll also suggests that a string of recent setbacks for the president — the failed North Korea summit, testimony from former attorney Michael Cohen, the ongoing Mueller investigation, and a weak jobs report — have all served as a drag on Trump’s polling numbers.

As the Hill notes, the only good news for Trump in the Gallup poll is that his support among Republicans remains high:

Trump’s approval rating is buoyed in large part by Republicans, 90 percent of whom gave him positive marks in the Gallup poll. Thirty-three percent of independents approve of Trump, as do just 4 percent of Democrats, according to the poll.

Gallup also reports that Trump’s approval rating has remained low since he took office in January of 2017:

On a relative basis, Trump’s average approval rating since taking office is the lowest of any U.S. president dating back to Harry Truman. Trump’s personal high rating, 45%, has been achieved twice in his presidency — in the first week of his term and in June 2018, after his first meeting with North Korean leader Kim Jong Un. His lowest rating, 35%, was seen several times throughout 2017, his first year in office.

With the report from Special Counsel Robert Mueller expected soon, Trump could be facing even lower poll numbers. Congressional investigations may also erode his support if they uncover new acts that point toward impeachment.

Trump and members of his 2016 campaign are also facing possible criminal charges for actions they took during the last presidential race. Several members of the campaign have already been indicted or made plea agreements with federal prosecutors, but other jurisdictions, including from states such as New York, could prove to be especially damaging to the president because he cannot pardon anyone on state charges in order to obtain their silence.

If the economy begins to falter, as has been predicted by numerous economists, Trump could also see lower poll numbers and increasing calls for his removal from office.