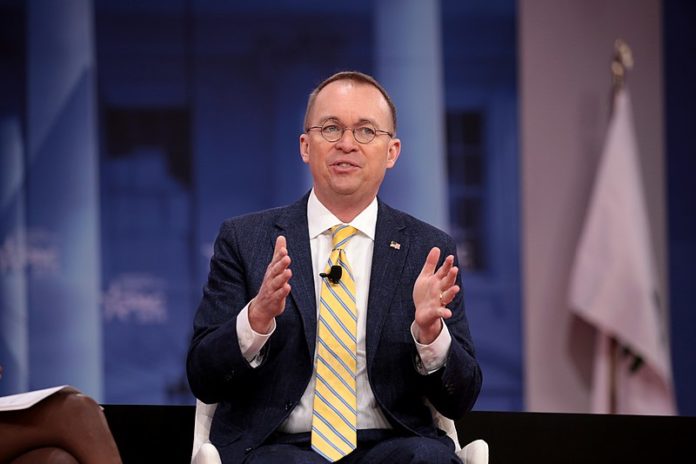 President Donald Trump hastily made current budget director Mick Mulvaney his acting chief of staff on Friday after weeks of failing to find anyone who wanted the job. And the honeymoon may already be over after stinging comments about Trump from Mulvaney have resurfaced.

On Friday afternoon, Trump announced on Twitter that he had picked Mulvaney to replace John Kelly:

I am pleased to announce that Mick Mulvaney, Director of the Office of Management & Budget, will be named Acting White House Chief of Staff, replacing General John Kelly, who has served our Country with distinction. Mick has done an outstanding job while in the Administration….

Twitter users mocked Trump for tacking on a claim that “many people” wanted to be his chief of staff, especially since it appears Mulvaney had no idea he was even being considered as he responded to Trump’s tweet half an hour later to accept:

This is a tremendous honor. I look forward to working with the President and the entire team. It’s going to be a great 2019! https://t.co/X4gauBOg1d

Thus far, Mulvaney and Trump are getting along, but we all know that Trump holds grudges, and once he finds out what Mulvaney said about him in 2016 it won’t be long before the new acting chief of staff becomes the third chief of staff that Trump stops talking to before he fires him, just like Reince Priebus and John Kelly.

During a last-minute public forum to make their case to voters prior to Election Day in 2016, Mulvaney and his Democratic challenger were asked about the presidential candidates. Mulvaney, the incumbent Republican congressman from South Carolina, threw his support to Trump, albeit very reluctantly:

“Yes, I am supporting Donald Trump but I’m doing so as enthusiastically as I can, even the fact that I think he’s a terrible human being, but the choice on the other side is just as bad,” he claimed at the time.

Of course, former Secretary of State Hillary Clinton was running against Trump, winning the popular vote by nearly 3 million votes, but losing the presidency after Trump received more electoral votes.

Trump may already know about Mulvaney’s old remarks, but if he doesn’t he could call his new chief of staff to the rug to make him apologize and beg for forgiveness, which would not be a great way to start their working relationship. Again, Trump is known to hold personal grudges and he’s sensitive to even the smallest of slights, even if the criticism is accurate.

Will Trump be able to ignore his thin skin or will Mulvaney’s past assessment of him interfere? Only time will tell, but it’s important to note that Mulvaney is just the acting chief of staff, which could mean it’s just temporary because Trump was embarrassed that none of his previous choices wanted the job and just randomly chose Mulvaney out of desperation to change the news cycle. At least that’s what veteran CNN journalist Jim Acosta reported on Friday night:

““The timing is very noteworthy,” Acosta said. “The president appears to be dangling a bright, shiny object on this late Friday evening, selecting his budget director Mick Mulvaney as his acting chief of staff. The president is apparently trying to change the news cycle here, but even today with a momentous decision as naming a new chief of staff or an acting chief of staff, it is going to be tough to change the narrative of this news cycle with his former attorney, Michael Cohen speaking out, and not just to the special counsel’s office.”