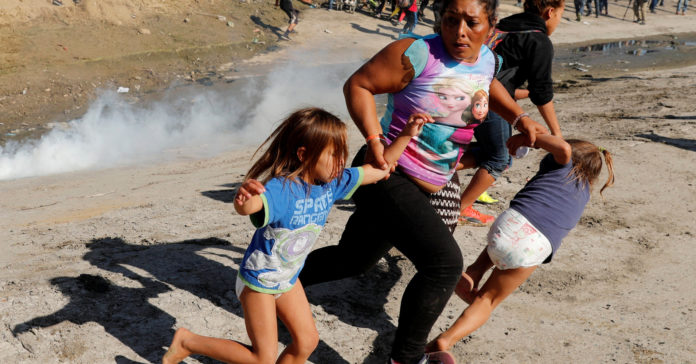 Immediately after he fired Kirstjen Nielsen as head of the Department of Homeland Security on Sunday afternoon, President Donald Trump quickly announced the new acting head of DHS would be Kevin McAleenan, who has praised the use of tear gas on children in the past.

McAleenan, it should be noted, is NOT next in line to replace Nielsen, and his former job was as head of U.S. Customs and Border Protection (CBP), which in November of last year fired tear gas at a group of immigrants, including young children.

However, when McAleenan was later asked about the controversial move of tear gassing children young enough to be in diapers, the CBP chief remarked:

“I think it’s remarkable that agents were able to resolve the situation without any serious injuries or a breach of the border.”

As CNN reported at the time the tear gas was used at the border, the chemicals found in tear gas are incredibly dangerous:

“Tear gas is often assumed to be an irritant, like the fumes of an onion in the eyes or pepper in the nose. Recent medical research has proven otherwise, says Sven Eric Jordt, an assistant professor of anesthesiology at Duke University who specializes in sensory mechanisms.

“‘We discovered that the chemical causes pain by activating pain receptors,’ Jordt says. ‘I would consider them to be nerve agents that selectively and very potently engage pain nerves.”

Despite such horrific effects from tear gas when inhaled by children, it was reported late last year that President Trump was delighted by the video seen around the world of children being gassed, even praising DHS chief Nielsen for such a harsh action because it made the administration look “tough” on the issue of immigration.

Reportedly, Trump fired Nielsen as Homeland Security chief because she refused to restart the forced separation of migrant children from their parents. And now he wants to find someone who will follow his every order, even if it violates the law.

If Trump does indeed violate his own executive order on family separations, this country will have taken another dangerous step towards becoming a fascist police state.