The United States Blues
Home News Trump’s nominee to be U.N. Ambassador is a science denier who donated... 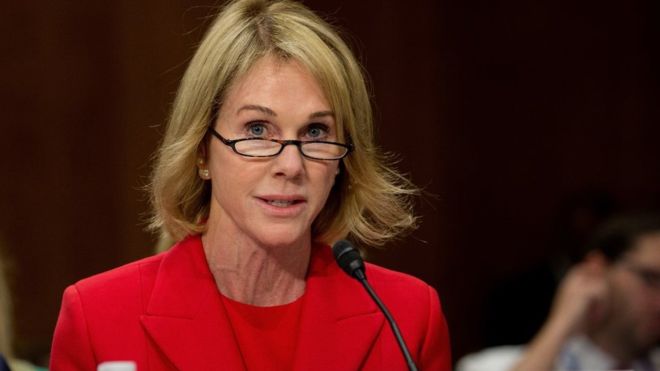 It’s entirely possible that you’ve never heard of the person President Donald Trump nominated Friday to serve as his next ambassador to the United Nations, but Kelly Knight Craft is known in right-wing circles as an ardent denier of climate change who also gave millions to Trump’s 2016 campaign.

I am pleased to announce that Kelly Knight Craft, our current Ambassador to Canada, is being nominated to be United States Ambassador to the United Nations….

….Kelly has done an outstanding job representing our Nation and I have no doubt that, under her leadership, our Country will be represented at the highest level. Congratulations to Kelly and her entire family!

‘Both Sides’ of Climate Change

Kelly Craft has said that she believes “both sides” of the climate change debate, even though such a statement proves either her complete ignorance of the issue or her willingness to lie when confronted with scientific facts:

Ambassador Kelly Knight Craft is married to Joe Craft, who just so happens to be president and chief executive officer of Alliance Resource Partners, L.P., the third-largest coal producer in the eastern United States. Both of them also have close ties to Senate Majority Leader Mitch McConnell (R-KY). Mr. Craft’s net worth is estimated to be $1.4 billion.

The Craft’s were eager donors to Donald Trump’s 2016 run for the White House, gladly handing over $265,000 to the Trump campaign and another $17,000 to the Republican National Committee.

Global News of Canada tracked other campaign gifts the Craft’s have given over the past few years:

“Records compiled by the U.S. Center for Responsive Politics show a multi-million-dollar history of political donations — her husband’s business gave $2 million to Karl Rove’s American Crossroads Super PAC in 2010, $250,000 in 2014, and $500,000 each to other Super PACs.”

Remember how Trump swore he would appoint the “best people” to positions in his administration? If Kelly Craft is the “best” he can do, then it’s no wonder his presidency has already been the most corrupt in American history.