The United States Blues
Home Elections Trump’s poll numbers are so bad the RNC won’t even share them... 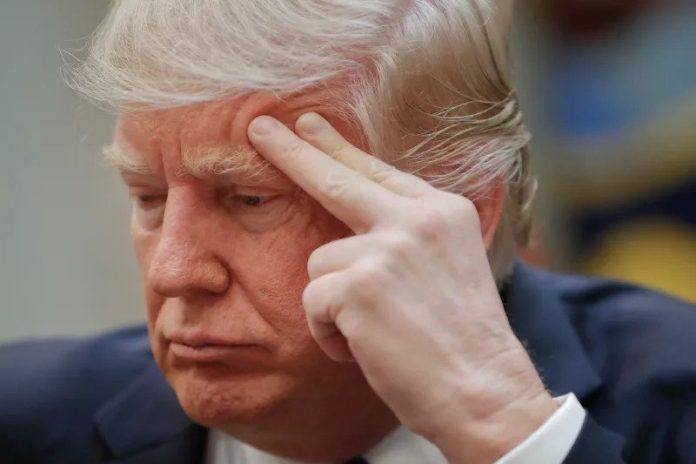 President Donald Trump began the day on Wednesday — the 18th anniversary of the terror attacks on the United States that left nearly 3,000 people dead — by whining about a new Washington Post/ABC News poll showing him trailing the leading Democratic presidential candidates. According to Trump, the poll was rigged and therefore “fake news.”

The poll in question had other bad news for the president: Only 38 percent of those surveyed approve of the job he’s doing.

As Greg Sargent points out in an op-ed for the Post, Trump’s poll numbers are so bad that the Republican National Committee (RNC) won’t even share them with GOP candidates who will be running down-ballot from the president in 2020:

Since Trump’s election in 2016, critical “voter scores” — sophisticated polling-based analytics that the RNC provides to party committees and candidates — have conspicuously omitted an essential detail for any down-ballot race: how voters in specific states and congressional districts feel about Trump. Republican insiders believe these analytics are being withheld to try and prevent GOP candidates from publicly distancing themselves from the president or leaking unfavorable results that embarrass Trump.

Yes, you read that correctly: The RNC is terrified that fellow Republicans will be able to use polls from the party apparatus that’s supposed to help them win reelection because that might embarrass a man who is perfectly capable of embarrassing himself and the entire country with one of his tweets.

But wait, there’s another example that Sargent provides which shows not only just how actively this administration is at war with the truth, but also how completely Trump has made the GOP the Party of Trump.

The administration is using the information provided by the Mexican government so the White House can present a false narrative of what’s happening at the border and is even employing that Mexican data instead of information from the U.S. government:

Just incredible: the Mexican govt basically got Trump to endorse its view of the migration deal (big success) over that of his own advisors (Mexico needs to do more) by presenting him with a flattering chart — which the president then posted to Twitter as if it were a US govt doc

Sargent concludes his op-ed by noting that the entire apparatus of the United States government is now being used for one primary purpose: To serve the massive ego of Donald Trump:

Everything must always be pressed into service — even, it appears, to the detriment of the political needs of down-ballot candidates in Trump’s own party — for the single highest good of propping up the Cult of Trump.

If anyone still needs a reason to vote for anyone but Trump come 2020, this is it. This country is supposed to be about all of us, and the government is meant to serve we the people. Instead, it’s being used to keep one man pacified.