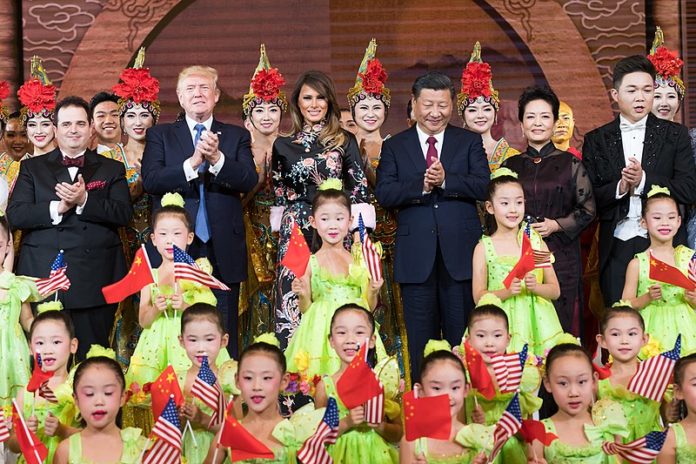 As President Donald Trump desperately continues to seek a trade agreement with China, his own State Department isn’t making that task easier by taking a very racist stance against the Asian nation.

Trump’s trade war against China has irrevocably harmed American farmers while blowing up the trade deficit to a record high.

He’s been insisting for months that a deal is close, but a State Department policy planner might have thrown a wrench in those negotiations by revealing the unbelievably racist stance the administration is taking toward China, which holds a significant portion of American debt and is a key partner in international affairs.

“This is a fight with a really different civilization and a different ideology and the United States hasn’t had that before,” Kiron Skinner said during a security forum on Monday in Washington DC.

“The Soviet Union and that competition, in a way it was a fight within the Western family,” Skinner continued. “It’s the first time that we will have a great power competitor that is not Caucasian.”

And because the Chinese are “not Caucasian” like the Russians, Skinner appeared to argue that only white people are capable of caring about civil rights, thus demonizing the Chinese as monsters.

“It was a really important Western concept that opened the door really to undermine the Soviet Union, a totalitarian state, on human rights principles,” Skinner said. “That’s not really possible with China.”

She then called China a “long-term threat.”

“We see it as a more fundamental long-term threat,” Skinner said. “In China, we have an economic competitor, we have an ideological competitor, one that really does seek a global reach that many of us didn’t expect a couple of decades ago.”

This is about as offensive and ignorant as it gets and casts doubt on the ability of the State Department to handle diplomatic relations under Trump.

The fact is that we have competed with non-white competitors before, such as Japan and South Korea. There’s also India and Saudi Arabia and Mexico just to name a few more. And Skinner has a lot of nerve talking about how white people are human rights champions when Trump himself is busy kidnapping brown children from their parents and locking them up in cages in internment camps. That’s a crime against humanity that should be tried at The Hague.

And Skinner is also pretending that Russia isn’t a human rights violator. Let’s not forget that Russia is hostile and deadly to journalists and many have been killed, some very recently. It also took decades to change the Soviet Union. America’s open relationship with China only goes back to the 1970s. China has made much progress since then even though there’s still room for improvement. But our relationship with China will only continue to worsen if Trump and his officials treat China like second class citizens of the world.

Her statement about China being an alleged “threat” could also apply to Russia, the nation that literally attacked us by interfering with our democratic process during the 2016 Election and is currently meddling with Venezuela in an effort to gain a foothold in our back yard. And that’s not to mention Putin’s nuclear threat against our country and his efforts to weaken NATO.

This administration really needs to get their priorities straight and stop basing international strategy on racist tropes. This is how conflicts are started, not avoided.