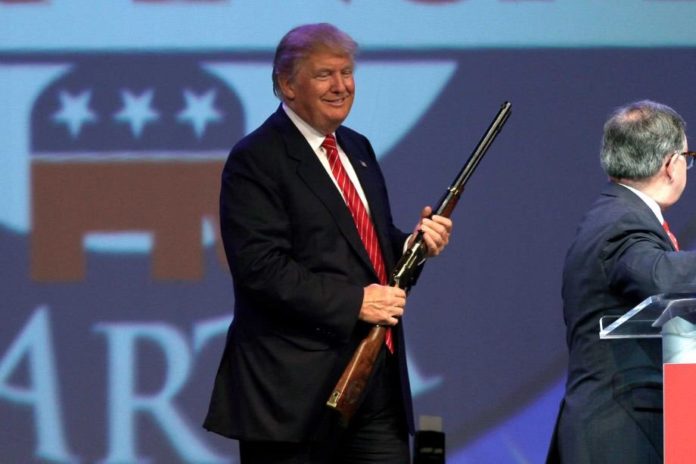 In the aftermath of 17 deaths at Marjory Stoneman Douglas High School in Parkland, Florida, President Trump promised he was ready to take on the National Rifle Association (NRA) when it came to passing legislation that would more strictly regulate gun ownership in the U.S.

But on Thursday, Trump will meet with envoys from the video game industry, and it now appears he’s planning to place the blame for mass shootings in America on them.

The Daily Beast reports that representatives of the gaming industry are worried they’ll be ambushed when they meet with the president:

“Among the video game industry and its allies, frustration and fears have grown as the disorder became clearer. In particular, there is concern that the White House will insist on cameras being allowed to broadcast from the session so that the president could create a video-ready culture-war moment on the causes of school shootings.”

John Feinblatt, president of Everytown for Gun Safety, noted that video games are clearly not the problem, and he cited Canada as proof of his thesis:

“I think you only have to look at Canada. They see the same video games that Americans do. They get all the same cultural signals and they don’t have a problem with gun violence as we do. In the end it is not about video games.”

The Entertainment Software Association, a trade group for the video game industry, said in a statement on Monday:

“Video games are plainly not the issue: entertainment is distributed and consumed globally, but the US has an exponentially higher level of gun violence than any other nation.”

Recently, Trump signaled the White House’s shift away from gun control to video games when he commented:

“We have to look at the internet because a lot of bad things are happening to young kids and young minds, and their minds are being formed. I’m hearing more and more people say the level of violence on video games is really shaping young people’s thoughts.”

That alone suggests that Trump is getting his talking points directly from the NRA. Wayne LaPierre, vice president of the NRA, also tried to blame violent video games shortly after the Newtown mass shooting in 2012 that left 26 dead, including 20 children between the ages of 6 and 7:

“There exists in this country, sadly, a callous, corrupt and corrupting shadow industry that sells and sows violence against its own people, through vicious, violent video games with names like ‘Bulletstorm,’ ‘Grand Theft Auto,’ ‘Mortal Kombat,’ and ‘Splatterhouse.’

Amazingly, LaPierre managed to make those remarks with a straight face and despite the fact that he serves as a paid shill for those who manufacture weapons of mass murder.