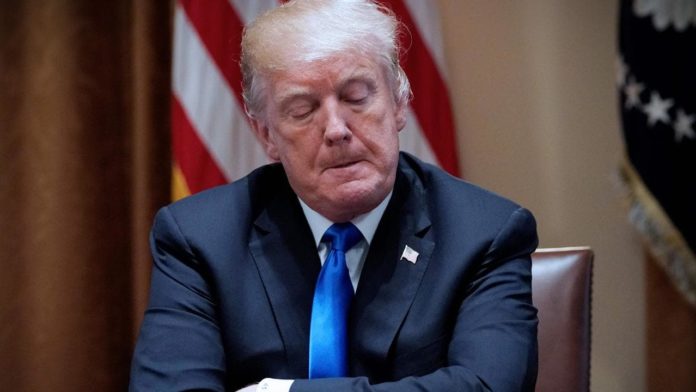 President Donald Trump has just been proved to be a liar by his own Commerce Department after a new report reveals that the United States trade deficit reached a 10-year high despite his claims that America is taking in billions of dollars in tariffs due to his trade war.

For months, Trump has been engaging in trade wars with China, Canada, Mexico, Turkey, and the European Union over his perceived unfairness of the U.S. trade deficits with those economies.

Billions of Dollars are pouring into the coffers of the U.S.A. because of the Tariffs being charged to China, and there is a long way to go. If companies don’t want to pay Tariffs, build in the U.S.A. Otherwise, lets just make our Country richer than ever before!

Trump would repeat the claim earlier this week:

….I am a Tariff Man. When people or countries come in to raid the great wealth of our Nation, I want them to pay for the privilege of doing so. It will always be the best way to max out our economic power. We are right now taking in $billions in Tariffs. MAKE AMERICA RICH AGAIN

But it turns out that Trump’s trade war is hurting our economy and making the deficit much worse.

According to a new report from Reuters:

“The Commerce Department said on Thursday the trade deficit increased 1.7 percent to $55.5 billion, the highest level since October 2008. The trade gap has now widened for a five straight months. Data for September was revised to show the deficit rising to $54.6 billion instead of the previously reported $54.0 billion.

“The politically sensitive goods trade deficit with China surged 7.1 percent to a record $43.1 billion in October.”

Ironically, the tariffs on China actually ended up making Chinese goods cheaper, leading to a higher demand from American consumers.

The trade deficit also increased in September as well, and Reuters reports that it will have a negative affect on gross domestic product, which economists predict will fall to 2.8 percent for the fourth quarter, a decrease from the 3.5 percent third quarter that Trump spent lots of time bragging about earlier this year. It’s also a signal that the economy is slowing down after several years of record breaking growth under former President Barack Obama that continued after he left office.

“This suggests trade will probably be a drag on gross domestic product in the fourth quarter, and adds to weak housing and business spending on equipment reports in signaling a slowing down in economic growth. Trade subtracted 1.91 percentage points from GDP growth in the July-September quarter.

“Growth estimates for the fourth quarter are around a 2.8 percent annualized rate.”

This is terrible news for the American people, especially conservatives who actually believed Trump was going to help them. It’s little wonder then why Trump is so desperately pursuing a deal with China. If the grim economic news continues, he and his Republican allies are in deep trouble in 2020. Because while all of their wallets won’t be negatively affected by this folly, American voters are going to be unforgiving.