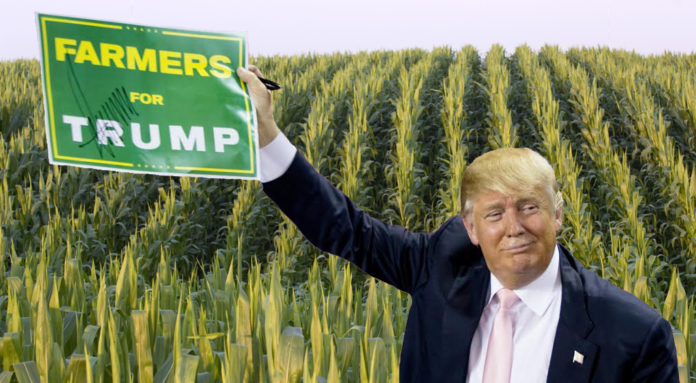 Back in August, President Donald Trump bragged to a group of farmers that they should love him more than they did when they voted for him in 2016 because of the $28 billion he had already given them in bailout money (i.e. taxpayer dollars) in an effort to offset the trade war he started with China, telling them:

“I sometimes see where these horrible dishonest reporters will say that ‘oh jeez, the farmers are upset.’ Well, they can’t be too upset, because I gave them $12 billion and I gave them $16 billion this year. I hope you like me even better than you did in ’16.”

But as Bloomberg notes, farmers are not exactly pleased with what’s happening to them:

A couple of years ago, a pep talk from Trump might have drawn raucous applause from one of the president’s key constituencies. This time the crowd was subdued. “The aid package that has come in is a relief, and it softens the landing, but it’s not a solution, it’s a Band-Aid,” says (soybean farmer) Stan Born.

Remember when President Barack Obama bailed out the auto industry in 2009? There were howls of outrage from Republicans who said the government should stay out of the private market and let the big three U.S. automakers fail. And yet that bailout was paltry compared to the one for American farmers, but the GOP is praising Trump for doing the same thing Obama did:

“China hawks in Trump’s administration want Beijing to quit subsidizing strategic industries, yet that hasn’t deterred the White House from doling out billions in aid to American farmers, who have become more dependent on government money than they’ve been in years. At $28 billion so far, the farm rescue is more than twice as expensive as the 2009 bailout of Detroit’s Big Three automakers, which cost taxpayers $12 billion. And farmers expect the money to keep flowing: In an August survey by Purdue University and the CME Group, 58% said they anticipate another round of trade aid next year.”

Also, it should be noted that the auto bailout turned a profit and even helped create an additional 341,000 jobs in addition to the ones it saved in the darkest days of the Great Recession. As a matter of fact, auto sales were booming until Trump took office and started his trade war with the rest of the world.

While Donald Trump may claim to be a capitalist, he sure does love his brand of socialism when it takes the form of paying farmers to vote for him despite his managing to destroy their livelihoods.