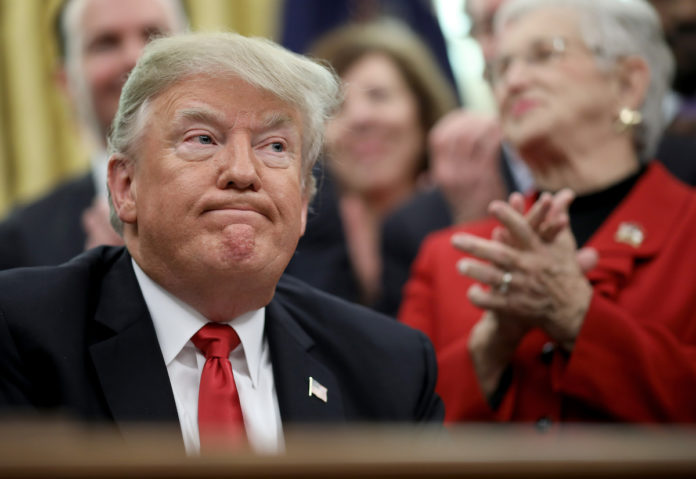 President Donald Trump continues to insist that the American economy is roaring like never before because of his tariffs against China. But the Wall Street Journal systematically shot that false claim down this week by citing the bad economic numbers caused by Trump’s trade war.

New tariffs went into effect earlier this month, and more will follow in October and December, further demonstrating that Trump has no intention of hitting the brakes and throwing his trade policies into reverse despite the great damage done to farmers and manufacturing over the last year and a half since the trade war began.

Even Trump has somewhat admitted that Americans are taking a hit because of his tariffs because he had canceled some tariffs from going into effect because Americans would have had to pay more for Christmas. Now those tariffs are being enacted in retaliation against China retaliating against us.

Still, Trump continues to deny that his trade policies are hurting the economy at all, forcing the Wall Street Journal to call him out and roll out the statistics for all Americans to see.

“President Trump tweeted Friday that ‘The Economy is great. The only thing adding to ‘uncertainty’ is the Fake News!’ Sorry, sir. The economy is fair to good, but it’s no longer as great as it was last year, and a major reason is the uncertainty caused by Mr. Trump’s trade policy,” the Wall Street Journal editorial board began.

First, the editorial board cited the recent labor report released by Trump’s own government in August showing job losses and slower job growth.

Friday’s labor-market report for August shows that job creation in the goods-producing economy has slowed to a trickle. Mining and logging lost jobs for the third month in a row while manufacturing produced a mere 3,000, after only 4,000 in July. This reflects declining demand for U.S. goods around the world due to slower growth abroad caused in part by Mr. Trump’s protectionist shock to the global trading system.

Then they referred to Federal Reserve data showing a decline in global GDP.

The economists did a statistical analysis of newspaper articles and earnings-call transcripts to measure what they call ‘trade policy uncertainty,’ or TPU. They then used that and other data to estimate the impact of TPU on economic growth and industrial production in the U.S. and the world. ‘We find that the rise in TPU in the first half of 2018 accounts for a decline in the level of global GDP of about 0.8 percent by the first half of 2019,’ the economists write. That damage would be diminishing now if trade tension had abated, the study shows.

The board then warned Trump and Republicans that a recession could hit in 2020, an election year that is already looking bad for Trump as his poll numbers crater in swing states that he won in 2016.

“Mr. Trump and Republicans should be especially worried about the Fed’s estimate that the trade damage will continue through early 2020,” the Wall Street Journal concluded. “He may not want to believe anything from the Fed. Then again, we predicted this result two years ago. Bad policies have negative consequences, whether they come from the right or left.”

If a recession occurs in 2020, Trump and the Republicans will definitely not be able to use the economy as a selling point, and it had been the strongest argument they had despite that fact that true credit for the strength of our economy belongs to former President Obama.

Losing that talking point would be devastating to Republican efforts to keep the White House and Senate, and could result in a second blue wave even bigger than the one in 2018. And a recession will be more and more likely as long as Republicans refuse to stand against Trump’s trade policies and end this trade war. But it’s likely already too late.